Legitimation Code Theory (LCT) is not a magic bullet to transform education, but it holds potential for educators and students. 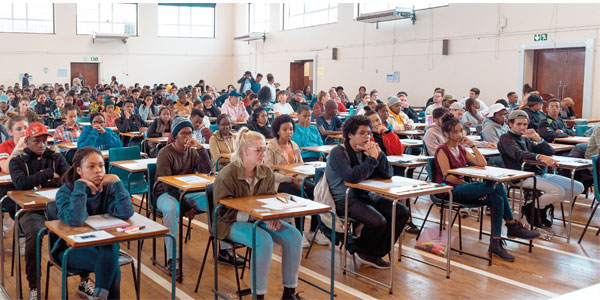 The transition from matric to first-year university can be daunting for students unfamiliar with the ‘rules of the game’. Legitimation Code Theory (LCT) is a theory of learning and teaching that provides a ‘toolkit’ to analyse knowledge construction in cultural fields, especially education.

Arriving at university for the first time can feel like taking part in a sport where no one’s told you what rules apply. Being unable to figure out the demands and expectations quickly enough can be the difference between success and failure. For many new students, the “rules of the game” on campus, and how to acquire knowledge successfully, remain a mystery.

Making these “rules” more explicit is key to Legitimation Code Theory (LCT). Over the past two decades, LCT has developed as a theory that reveals complexity in knowledge-based practices. LCT provides concepts and codes that enable the study of knowledge in various practices and disciplines, including education.

Professor Lee Rusznyak, Deputy Head of School of Education says, “We often see students work very hard on an assignment but are then disappointed when they get low marks, because they don’t yet understand why they have not done well. When students are better able to recognise what excellence looks like, they can work towards achieving that.”

LCT architect, Professor Karl Maton is the Director of the LCT Centre for Knowledge-Building, University of Sydney, and a Visiting Professor at Wits. He was at the third biennale international LCT conference that Wits hosted in July 2019.

“If you are the first in your family to go to university, like I was, you arrive at university just trying to survive, never mind trying to succeed,” says Maton. “LCT is a way to analyse how knowledge works in different practices. Then we can teach these underlying ‘codes’ to students who all arrive at university with their own socialisations and dispositions. LCT provides the tools for educators to think about cumulative knowledge-building in their fields of expertise.”

LCT also offers the possibility for transforming practices. When the sets of codes that are accepted as the basis of success are revealed, they can be challenged and changed if necessary. Maton explains: “There are struggles over the legitimation of practices – struggles over whose way of seeing is legitimate and whose way of seeing is dominant and how this informs curricula, for example.”

Embracing these debates make LCT a powerful tool that can contribute towards understanding how to advance social justice within the education landscape. In South Africa, decolonising education, and how to do this effectively, has become an urgent priority.

Paul Maluleka is a Wits doctoral candidate exploring how South Africa can decolonise and Africanise its school History curriculum. He chaired a panel on LCT and Decolonisation: The quest for inclusion and social justice during the conference Wits hosted.

“LCT can be a lens into understanding different perspectives and to understand who controls knowledge and who produces and reproduces knowledge,” says Maluleka, for whom LCT’s focus on getting to the underlying DNA means that transforming education in a socially just way extends to considering all elements of why success eludes many.

For Maluleka, decolonisation is not only about how knowledge-practices work in curricula; it must also consider the contextual realities of education in South Africa, like why there are still schools without electricity, why measurements of success – like exams, or being taught in English – apply equally to students with different challenges and lived realities.

“Decolonisation and Africanisation of education are two different concepts, and both should be viewed as on-going projects for everyone in this country, everyone in the world, in fact. It’s not about replacing one system with another, but it’s about seeing African knowledge and African ways of being as equal and bringing these to the table so that we can develop an African-centric approach that builds a more just world that is good for everyone,” Maluleka says.

LCT is not a magic bullet to transform education, but it holds potential for educators and students in its ability to work with theoretical ideas and practical realities within a social justice agenda.