A lasting legacy for Wits History

Celebrated historian, researcher and teacher, Professor Emeritus Bruce Murray, passed away in July 2019 before he could bequeath Wits University with another priceless historical account: his final essay on the 100 years’ history of the Wits History Department.

Now, with the help of Professor Clive Glaser and Dr Prinisha Badassy, Murray’s last essay and beautifully narrated historical account on one of Wits’ oldest departments, titled: A Century of the Wits History Department: 1917–2017, was published in the South African Historical Journal in November 2019.

Glaser and Badassy provided the necessary editorial revisions to ensure Murray’s essay can be posthumously published. 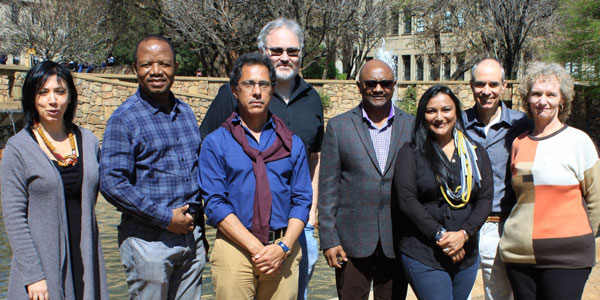 Extract from the Editorial Note:

In 2017, the Wits History Department celebrated its centenary. To mark the milestone, Professor Bruce Murray was commissioned to author the hundred-year history of the Department. In the same year, the Department hosted the 26th Biennial Conference of the Southern African Historical Society during which a plenary session focused on the centennial. The panel considered the work of the History Department over the last hundred years, thinking through the ways in which the Department responded to pedagogical, aesthetic, political and economic challenges. Much of the discussion also reflected on the interventions made by the Department and how it has been instrumental in shaping southern African historiography. Murray’s essay was written in response to this plenary but with the purpose of documenting the Department’s history and the significant impact it has made on the scholarship and the wider public, by charting new paths and breaking with tradition in often unpromising contexts.

“The Department of History at the University of the Witwatersrand, Johannesburg (Wits), is older than the university itself, celebrating its centenary in 2017, five years ahead of the university, which was established in 1922. The department had its origins in the South African School of Mines and Technology, a precursor of Wits, which in 1917 embarked on the teaching of the arts. In 1916, amid howls of protest from Johannesburg and the wider Witwatersrand that their educational interests were being ignored, Parliament approved the first university bills for the new Union of South Africa, setting up teaching universities at Cape Town (UCT) and Stellenbosch, and a federal university of South Africa with its headquarters in Pretoria (UNISA). The one concession made to the Witwatersrand was that the existing School of Mines, which would become a constituent college of UNISA, was empowered to extend its work beyond science and technology. The teaching of the arts, previously reserved by Jan Smuts, as Minister of Education in the Botha Government of the old Transvaal, for the Transvaal University College in Pretoria, was now permitted in Johannesburg.

“Altogether the School of Mines established eight art departments: English, Logic and Philosophy as a single department, Education and Psychology as another, Economics, Geography, Classics, Dutch, French, and History. Two new science departments also emerged, Botany and Zoology, which together with the established departments in Chemistry and Physics were intended to lead to degree work in medicine as well as science. The School of Mines had effectively become a university college in all but name, and in 1920 it was formally given the title, University College, Johannesburg, by Act of Parliament. In 1921, by another Act of Parliament, provision was made for the University College to become the University of the Witwatersrand, Johannesburg, in the next year. The Department of History was the fifth such in the country, after Cape Town (1903), Stellenbosch (1904), the Transvaal University College, Pretoria (1909), Rhodes University College (1911), and Natal University College (1916). Very much a pioneer department, it was to become a major forerunner in the writing of South African history.” […]