A delegation from Wits University, headed by the Vice-Chancellor and Principal, Professor Adam Habib, visited the European Laboratory, CERN.

A delegation from Wits University headed by the Vice-Chancellor and Principal, Professor Adam Habib visited the European Laboratory, CERN.

Habib was joined by Alexandra Leisegang, Executive Officer to the VC, Professor Zeblon Vilakazi, DVC for Research and Post-Graduate Affairs and Dr Robin Drennan, the Director of the Research Office.

CERN hosts the most powerful accelerator in the world, the Large Hadron Collider (LHC). CERN is known globally for contributions to science and technology, such as the invention of the Internet and the discovery of the Higgs boson, which is responsible for the origin of known mass in the universe. The LHC at CERN is the most powerful microscope in the world, designed to explore the mysteries of matter and forces in the Universe. In resolving these intricate problems in physics researchers push the boundaries of science and technology, thus bringing breakthroughs to society. CERN is a powerhouse for the training of young specialists in Big Data and Artificial Intelligence. 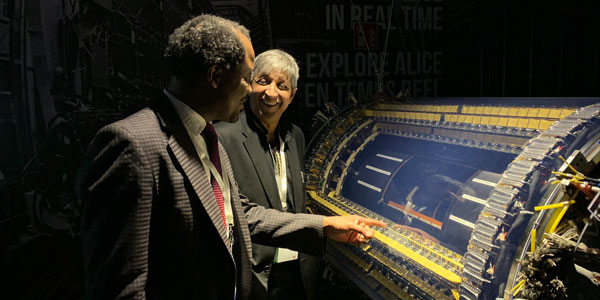 The day started with a visit of the ALICE detector, where Dr Zinhle Buthelezi, a Senior Scientist from iThemba LABS and an Honorary Professor at Wits, together with Dr Siegfried Fortsch also from iThemba LABS, lead a guided tour. The ALICE detector is designed to explore a state of matter called the quark-gluon plasma. It is believed that the universe was in the state of quark-gluon plasma a micro-second after the Big Bang.

One can think of ALICE as a time machine that provides insight into the first moments of the evolution of the Universe. The delegation visited the ALICE control room, the visitors centre and the very impressive detector, which sits underground. The ALICE detector is undergoing a major upgrade, where all its subsystems are being overhauled or replaced to cope with more challenging physics objectives.

Following the visit of the ALICE detector, the delegation proceeded to the Isolde complex. Dr Karl Johnson, a senior scientist from CERN, led the visit. Isolde uses protons from the LHC accelerator chain to create a wide span of radioactive ion beams for applications in nuclear physics, material sciences and health sciences. The Wits effort at this facility is led by Professor Deena Naidoo from the School of Physics.

Professor Karl Jakobs from the University of Freiburg, the Spokesperson of the ATLAS experiment, showed the control room of the detector to the delegation. Wits has a large involvement in the ATLAS experiment. This involvement includes contributions to hardware instrumentation, firmware and software developments, radiation certification, physics analysis, Big Data and Artificial Intelligence. The Wits Institute for Collider Particle Physics (ICPP) leverages these activities to deliver world-class training to South African post-graduate students and to provide technology transfer to the country in areas that are badly needed.

Upon concluding the visit of the experimental facilities, the delegation met with members of the ICPP working on LHC-related activities. Professor Bruce Mellado, the Director of the ICPP, gave an overview talk of activities. The ICPP is proud to announce the publication of a book by Professor Deepak Kar, “Experimental Particle Physics”. This book marks the consolidation of Collider Particle Physics in South Africa. Following a number of years of phenomenological studies, members of the ICPP and collaborators just published at the Journal of High Energy Physics the presence of statistically significant anomalies in the production of multiple leptons at the LHC. These anomalies are consistent with predictions made in earlier publications of the ICPP.

“The SA-CERN consortium gives young people like myself who want to pursue a career in research and academia an opportunity to work in world class facilities with international researchers and engineers. The relationships we form with these researchers will not only end with skills and knowledge transfer but opportunities to form international collaborations for when we do start our academic and research careers,” says Joyful Mdhluli, a PhD student from the ICPP working with Professor Elias Sideras-Haddad.

“At CERN students are exposed to complex data problems which require them to use or build state-of-the-art Artificial Intelligence algorithms to derive insights. The benefit to South Africa is that these skills are highly transferable and graduates can use them to solve various data problems in the future,” says Theodoe Gaelejwe, a M.Sc. student from the E-Science program led by ProfessorTurgay Celik, and also a member of the ICPP.