The rock art archive is the first of three new floors that will provide public access to some of South Africa's most valuable historical finds. 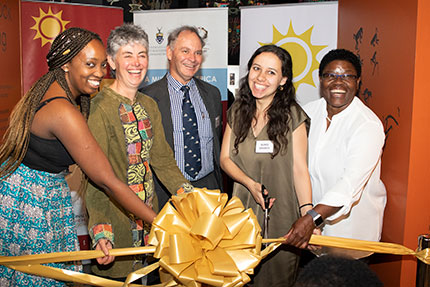 The new wing will consist of three new floors with public exhibitions hosting some of the most valuable fossils, rock art and archaeological treasures discovered by Wits researchers on African soil during the last century.

Opened at a gala dinner on Thursday night (24 October), the new wing’s basement provides public access to some of the finest examples of indigenous rock engravings. With additional funding the Ground and First Floor exhibits will be completed within the next two years. The Ground Floor will foreground breaking discoveries from Wits on the origins and evolution of South Africa's deep-time biodiversity. New dinosaur species, exposed by researchers in South Africa, will share the floor with the innovative technologies used to study them.

The first floor will record the history of Johannesburg, through the growth of Wits University, before and after the advent of gold mining in the city.

“The ground floor will showcase the latest information on South Africa’s dinosaurs and early mammal-like reptiles, while the first floor will bear witness to the history of Wits and to the good and bad effects of mining on the landscape and its people over time,” says Professor Amanda Esterhuysen, who heads the management of Origins.

Building of the new wing was started in 2013, after the University committed itself to provide greater public access to South Africa’s vast archaeological and historical archives, through the Origins Centre.

“Education is at the core of the Centre’s exhibits,” says Esterhuysen. “The Origins Centre will become the Centre for information about palaeontology, archaeology, geography and the environment for teachers, students and members of the public. It will stimulate conversation about topics that appeal to both the local visitor and tourist, and tie into primary, secondary and tertiary curricula.” 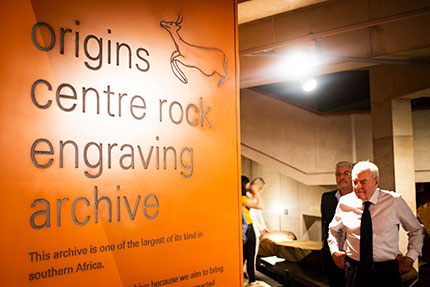 The Centre will also showcase new technologies used to explore the past, but unlike traditional museums the information will be layered to show the history of interpretation, the influence of colonial thought, and its impact on modern South African society.

“The Centre will provide a platform for open and frank discussion in order to expose and dispel scientific racism, build respect for each other and South Africa’s contribution to humanity, art, language, ideology, science and technology,” says Esterhuysen.

The Origins Centre resides within the Science Faculty and the School of Geography, Archaeology and Environmental Studies at Wits. The professionally curated exhibitions will be informed by work from Wits experts, particularly from the Evolutionary Studies Institute, which preserves a record of Earth from the earliest evidence of life 3.5 billion years ago to the origin of humans and their culture in the last 150 000 years.

Over a period of eighty years Wits palaeontologists and palaeoanthropologists have amassed large and internationally important fossil collections that are utilised by researchers around the world.

“Wits archaeologists have excavated material that has changed our understanding of early human behaviour and the earliest development of language, art and music, while those working within the last 500 years have recorded the earliest stone-walled cities and recorded examples of pre-colonial centralisation and urbanisation in Southern Africa,” says Esterhuysen. “These are important themes for research on African urbanism, and for transforming the way that people see the South African past.” 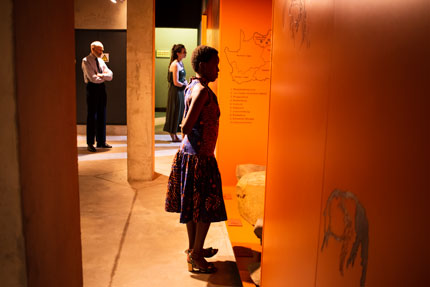 Wits’ Rock Art Research Institute is curator to the largest and most diverse rock art collection in South Africa, and its members are leaders in the dating, preservation and interpretation of the art, while the Geography division also has an excellent reputation both locally and internationally as one of the leaders in African scholarship on issues such as sustainability, climate change, GIS & remote sensing, urban social and environmental justice, tourism and development.

“We have an exceptionally talented creative team of multi-disciplinary experts and museum architects that have worked on the project and who will continue to ensure the Centre is a unique and contemporary museum space.”