Article aimed to disprove a long-held myth in the field of optics that Bessel beams are self-healing and can reconstruct after all forms of obstructions.

Wits PhD student Nokwazi Mphuthi has won an international prize from the Journal of the Optical Society of America A (JOSA A), for the best journal article for by emerging researcher in 2018. 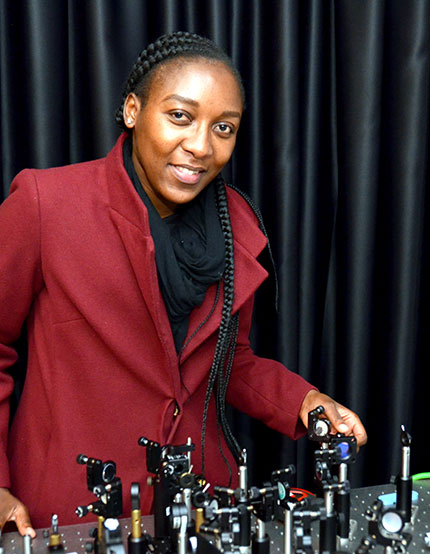 Mphuthi, who is a third-year PhD student working on a collaborative project with the Structured light group at Wits and the South African Radio Astronomy Observatory: HartRAO, won the prize for an article that she submitted to the journal, entitled “Are Bessel beams resilient to aberrations and turbulence?”.

This article aimed to disprove a long-held myth in the field of optics that Bessel beams are self-healing and can reconstruct in the spatial profile after all forms of obstructions. Bessel beams are a kind of wave form that are non-diffractive in nature, meaning they can maintain their size as they propagate, as opposed to normal light and sound waves that spreads out after being focussed on a small spot.

Mphuthi’s article showed that Bessel beams are in fact not self-healing after encountering phase changing disturbances.

“For Bessel beams to be self-healing, the obstruction needs to be non-transparent and small in relation to the beam size, and this can’t be translated to atmospheric turbulence, which is a phase disturbance,” says Mphuthi.

Mphuthi built a small aberration disturbance for a Bessel beam in the Structured Light Laboratory in the Physics Department at Wits and found that this obstruction interfered with the beam, which proved that the beam was not self-healing.

She then created a much larger atmospheric disturbance to test the Bessel beams with.

“All the conical waves that create the Bessel beam were disturbed by the atmospheric disturbance, which eliminated any chance of reconstruction (or self-healing) of the beam,” says Mphuthi.

The experiment not only disproved the myth, but also described under which circumstances the self-healing capabilities of Bessel beams are true.

Mphuthi is a PhD student with a BSc in Land Surveying from the University of KwaZulu-Natal. As part of her MSc project, she worked on a project in collaboration with the South African Radio Astronomy Observatory: HartRAO (South Africa), NASA (USA), and Observatoire de la Côte d’Azur (France) to develop the first Lunar Laser Ranging (LLR) system in the Southern Hemisphere. An extension of the LLR work to increase the efficiency of the system paved the way for collaborations between the Structured Light lab at the University of the Witwatersrand and HartRAO. The project aims to increase the photon return rate of laser ranging systems using structured light.

“Because of the long distance between the Earth and the moon a lot of light is lost due to spreading and atmospheric disturbances, so we approached the Structured Light Laboratory to see if we can improve the system efficiency by using sending structured light beam to the moon instead of the traditional Gaussian beam ,” says Mphuthi.

Increased accuracies in the distances between Earth and the moon can assist in a variety of geophysical research, such as improved tidal predictions.

“While this is not the first LLR system to be built, all current LLR stations are located in the Northern Hemisphere, so to increase the geometry of the ranging network we need some stations in the Southern Hemisphere,” says Mphuthi.

Her work in using structured light for a LLR system continues in the Structured Light Laboratory, where they hope to someday provide a means for sending orbital angular momentum to the Moon.

Mphuthi has also been selected as a finalist for the South African Women in Science awards which will held by the Minister of Science and Technology at Port Elizabeth on the 15 August 2019.