Team is working on techniques to produce useful compounds from wood and fast growing non-edible plant waste, through a chemical process named xylochemistry.

A team of international scientists has found an environmentally friendly way of producing potential sunscreens by using cashew nut shells, a waste material. 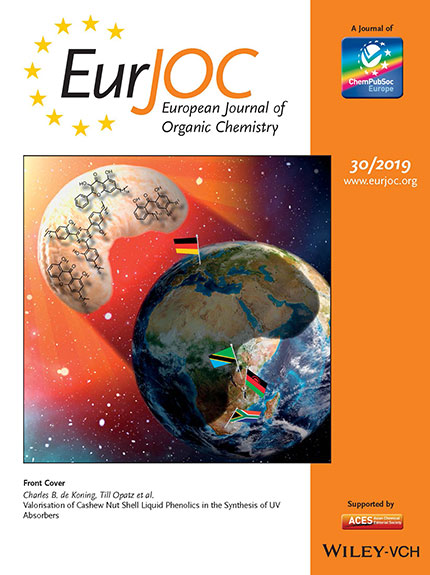 The team of “green chemists” from the University of the Witwatersrand, along with colleagues from Universities in Germany, Malawi and Tanzania, are working on techniques to produce useful compounds from wood and other fast growing non-edible plant waste, through a chemical process named xylochemistry (wood chemistry). By using cashew nut shells, the team has produced new aromatic compounds that show good UVA and UVB absorbance, which may be applied to protect humans, livestock, as well as polymers or coatings from harmful rays from the sun. The research has just been published as the cover article of the European Journal of Organic Chemistry.

UV rays are damaging to most materials, with its effects leading to the discoloration of dyes and pigments, weathering, yellowing of plastics, loss of gloss and mechanical properties, while it can lead to sunburn, premature aging and even the development of potentially lethal melanomas in both humans and animals.

To mitigate UV damage, both organic and inorganic compounds are used as UV filters. Ideal organic UV filters display a high UV absorption of UVA rays (in the region ranging from 315–400 nm) and UVB rays (280–315 nm). One important family of UV absorber molecules are derived from aromatic compounds known as phenols, which contain a hydrogen-bonded hydroxyl group that plays an important role in the dissipation of the absorbed energy.

For example, an organic compound known as oxybenzone is a common ingredient that has also been added to plastics to limit UV degradation. Apart from their petrochemical origin, a major drawback of current UV protection agents is their negative effect on aquatic ecosystems associated with a poor biodegradability.

As a result, there is growing attention from regulatory bodies and stricter regulations are being enforced on the production of sun filtering products.

“With the current concerns over the use of fossil resources for chemical synthesis of functional molecules and the effect of current UV absorbers in sunscreens on the ecosystem, we aimed to find a way to produce new UV absorbers from cashew nut shell liquid (CNSL) as a non-edible, bio renewable carbon resource,” says Professor Charles de Koning, of the Wits School of Chemistry and principal author of the paper, together with Till Opatz from Johannes Gutenberg University in Mainz, Germany.

“Cashew nut shells are a waste product in the cashew-farming community, especially in Tanzania, so finding a useful, sustainable way to use these waste products can lead to completely new, environmentally friendly ways of doing things.”

The team has already filed a patent application in order to commercialise the process in South Africa.