Intentional living, the rise of imikhukhu and urban densification for dignity. 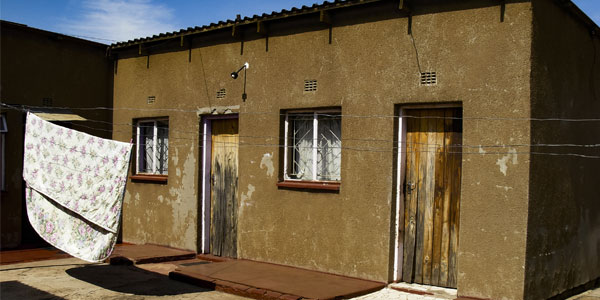 Backyard dwellings are a growing trend in a world where the need for accommodation is pressing. By saving money on their living spaces, many tenants are saving money for other investments.

Mncedisi Magadla opens the gate to his home in extension 2, Ivory Park. As he makes his way to the front door his path meets with that of his neighbour who greets him politely before dashing towards the gate. The neighbour is one of many residing in the small stand designed for one house.

The yard houses eight dwelling structures – one shack made from iron sheets in the front, known as umkhukhu in the townships, an RDP [Reconstruction and Development Programme] house in the middle, followed by four more imikhukhu at the back. Two other cement block rooms complete the structure. Magadla occupies the RDP house, which he rents from the owner who lives elsewhere in the township.

Magadla, who hails from the Eastern Cape, moved into this RDP house in January with his wife and three kids. The two girls are aged 22 and 11 years and the boy is 15-years-old. Prior to this, Magadla was a tenant for three years in a similar abode before things started going sour with his landlord, who refused to do maintenance.

To Magadla, the place where they live is just a place where they shelter and can hardly be called home. It lacks privacy and space, but it provides a place to lay their heads, he says. Magadla was forced to sell his freestanding home when the company where he worked as a furniture salesman ran into financial trouble in 2012. Sensing that there would be retrenchments, Magadla quickly took the decision to sell his home before the bank could repossess it, and lose a 10 year investment.

“It was the best decision that I have ever made. I took the money and built a more beautiful home in the rural Eastern Cape,” says the manager of a busy bed shop.

The Magadla family resides in what is a common setting in Gauteng townships. Many owners of formal dwellings have, without planning permission, constructed other dwellings on their properties in order to derive income from rental. Many are built with bricks and mortar, while others are more informal, according to a report produced by the Gauteng City-Region Observatory [GCRO].

A search on property sites shows that a 240 metre square stand with 13 backyard rooms can fetch as much as R18 000 per month in rental income. The same stand with a double storey block of flats can fetch double that amount. Magadla pays R3 200 for the two-bedroom RDP house. Research by Professor Sarah Charlton in the Centre for Urbanism and Built Environment Studies [CUBES] at Wits also found that the biggest industry in townships is the renting of accommodation space.

Satellite imagery obtained by the GCRO shows that backyard structures have increased dramatically over the years. The major increases are in Mamelodi, Diepsloot and Tembisa; in others, such as Soshanguve, they have been associated with an expanding footprint of settlements.

Public opinion is divided on backyard rooms or rental rooms in townships. Some neighbours are the most vocal when it comes to these dwellings, fearing that these will decrease the value of their property. Some of the notable outcries have come from traditional suburbs where there’s a growing appetite to convert households into student accommodation and communes, where a single room costs anything between R2 800 and R3 500.

There are also perceptions that the growing number of backyard rooms are a threat to government’s plan to provide decent housing for people and to eradicate overcrowding in township houses, in order to promote human dignity. The sheer number per stand is a hazard.

Not so, says Margot Rubin, Senior Researcher in Spatial Analysis and City Planning located in the School of Architecture and Planning.

“When we think about backyarding, we need to think about what is densification and what is overcrowding.”

Densification is the optimum use of the land space and is more desirable than overcrowding.

“Different areas have different abilities to support backyard rooms and densifications. Some of the older areas built under the apartheid have very high specifications in terms of the infrastructure that was provided and can probably support high numbers of units,” explains Rubin.

“Conversely, we have seen, for example, that the specifications on the new RDPs are quite small in terms of what they can support and can result in infrastructure overload.”

However, this is no reason not to support backyarding. A more useful response would be to improve infrastructure in order to cope with the settlements.

Where there has been overcrowding the government’s response was to de-densify the area, which Rubin feels is uninformed as evidenced in the Orlando de-densification programme which displaced over 70 000 people.

In the early 2000s, government sought to deal with overcrowding in Orlando by dangling a carrot stick to landlords. In agreement with the landlords, government offered to replace the poor structures of existing backrooms with more formal and safety compliant cement structures. However, these were limited to two or three units per yard.

De-densification is not the solution to the desperate need for accommodation, argues Rubin.

There are social and economic factors driving backyarding. These include affordability and proximity to services, economic and educational opportunities, and they are considered relatively safe compared to informal settlements.

In light of the national housing backlog, the model of backyard rental rooms should be supported according to Rubin. It meets the demand and also provides income to property owners, especially those who are unemployed, including RDP owners who draw public wrath for selling their homes in exchange for cash.

“It allows the poor to leverage on their property which is exactly what the government intends to achieve with state-sponsored houses.”

It’s not a perfect system, but it works in the absence of a national renting housing strategy. The market offers internal migrants from other provinces coming into Johannesburg an opportunity to save money, while they fulfil other family responsibilities and establish themselves.

The desire to own a house is also strong among backyard dwellers. Tshilidzi Ranguvha works as a security guard and pays R300 in rent for an umkhukhu that he erected in the backyard after negotiations with the unemployed landlord who stays in the main house. The remainder of his income goes towards monthly expenses and the construction of his house in Venda. Similarly, Rose Nethononda, who earns ±R8 400 a month, is proud of her home back in Venda, which she says gives her great pride.