Wits Journalism releases the State of the Newsroom 2018 report.

The State of the Newsroom, 2018: Structured/Unstructured report is the fifth report of its kind to be published by Wits Journalism, and chronicles the ups and downs of South Africa’s media industry together with few deeper dives into specific issues. 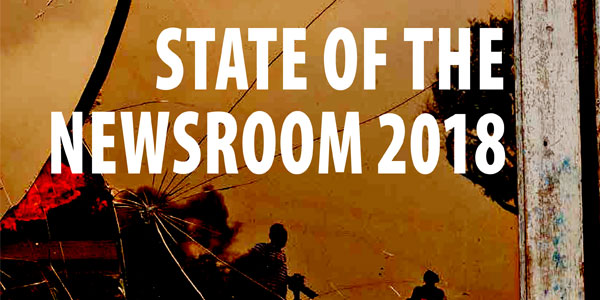 For the first time this year, the report also includes a set of indicators on the state of the news media, as well as some opinion pieces on key issues.

A core theme is how the 'industrial age' of journalism is shrinking, says editor and lead researcher, Alan Finlay, lecturer in Journalism and Media Studies at Wits: “While something of what we know of as ‘the media’ will remain, a lot now feels unsettled. Will our media landscape look the same in 10 year’s time? What will remain, and what will change, what will shatter, and what will disappear entirely? We have called this issue of the report 'structured/unstructured' to try and capture this uncertainty.”

This State of the Newsroom points to real shifts in the industry that suggest an on-going weakening of what is seen as the traditional newsroom. Newspaper circulation is still on its downward spiral, with a few titles looking as if they might not make it. Parallel to this, retrenchments in both broadcast and print remain a feature in 2018.

One of the contributors, Associate Professor Glenda Daniels from the Wits Department of Media Studies, shares some of her research into job losses in the industry, showing how unsupported journalists are when they lose their jobs. They are often treated shoddily by employers, while unions have little influence outside of the South African Broadcasting Corporation (SABC). Meanwhile, the freelancers’ association Safrea needs to reinvent itself to respond properly to the new reality of unemployed journalists who need a voice, she argues.

Another contributor, Anton Harber, Adjunct Professor of Journalism at Wits, suggests that fewer media houses are doing the hard work of investigative journalism, if contributions to the Taco Kuiper Awards are anything to go by. Donors are now supporting some of the most important journalism happening in South Africa – the investigative work of amaBhungane, and other projects such as GroundUp and the long-standing Health-e News.

With the pressure on fewer journalists to do more to make the news, contributor Finlay’s article on journalist safety and vulnerability is a call for editors to take more time and thought in planning assignments, to properly consider the risks journalists face both in the newsroom and on the beat.

The annual report is an attempt to be academically rigorous, while also being accessible to a wider public.