Research from the Wits School of Geoscience shows how platinum deposits form in the Bushveld Complex of South Africa. 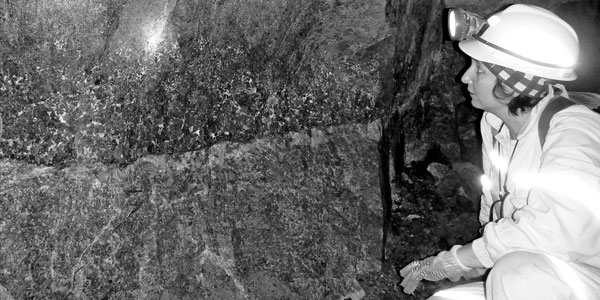 Most of the world’s economically-viable platinum deposits occur as ‘reefs’ in layered intrusions – thin layers of silicate rocks that contain sulphides enriched in platinum group elements which are so vital for the sustainable development of modern human society.

There are two competing ideas of how platinum deposits formed: the first involves gravity-induced settling of crystals on the chamber floor, while the second idea implies that the crystals grow in situ, directly on the floor of the magmatic chamber.

Through examining the Merensky Reef of the Bushveld Complex in South Africa, which hosts the lion’s share of the world’s platinum and other noble metals, Dr Sofya Chistyakova from the School of Geosciences of the University of the Witwatersrand and her collaborators have established that the crystals grow in situ, with its high platinum status being attained while all its minerals were crystallising along the cooling margins of the magma chamber. Their research was published in a paper in Scientific Reports.

One of the remarkable features of the Bushveld Complex is that at the time when the Merensky Reef was forming, some portions of its chamber floor were highly irregular due to circular depressions (potholes). Such potholes with the Merensky Reef are best exposed in underground exposures of platinum mines.

“Our key discovery is that the entire Merensky Reef package in these potholes may develop as a ‘rind’ covering all the chamber floor depressions and culminations, even where these are vertical or overhanging” says Chistyakova.

This finding points to no possibility for the Merensky Reef to be formed by crystal settling on the chamber floor because sinking crystals cannot penetrate the solid rocks that form the pothole’s overhangs. This strongly supports the concept that the silicate minerals and sulphides of platinum deposits grow directly at the floor of magmatic chambers.

“This is the most fundamental conclusion of our work and it can probably be applied to platinum deposits in other layered intrusions as well as potentially extended to other types of magmatic deposits, for example, chromite and Fe-Ti-V magnetite ores in mafic-ultramafic complexes” says Chistyakova.