Third-year information engineering students, Anita de Mello Koch and Kaamilah Desai from the Wits School of Electrical and Information Engineering, are part of the six-member team that participated in the 2019 International Supercomputing Conference (ISC) in Frankfurt, Germany, last week. 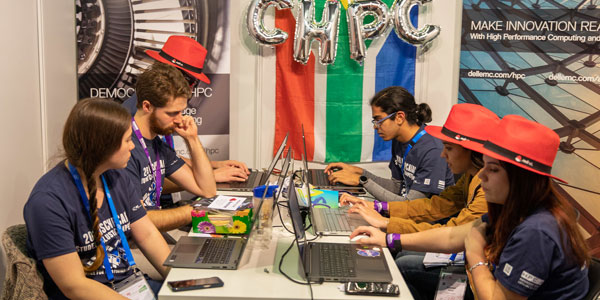 The SA team, made up of 50% men and 50% women, walked away with the highest overall score against teams, among others, from the USA, UK, China, Taiwan, Spain, Switzerland, Estonia and Singapore.

The ISC’ International Student Cluster Competition is regarded as the premier international high-performance computing student competition. South Africa won the competition on debut in 2013 and repeated the feat in 2014 and 2016, coming second in 2015 and 2017.  The South African team is one of few that consist entirely of undergraduate students, and of different students each year.

“It is great that South Africa do so well in this competition and that we can show we are at the forefront of this technology. You are not necessarily exposed to supercomputing in your studies and this is a great way to get introduced to the field. It was also amazing to attend the conference where we learnt a lot from the greatest minds in supercomputing,” says De Mello Koch.

In December last year, the team members represented their individual universities during the Centre for High Performance Computing (CHPC)’s 12th National Conference hosted in Cape Town. Wits students in the School of Electrical and Information Engineering (EIE), including De Mello Koch and Desai, and from the School of Computer Science and Applied Mathematics (CSAM) won various awards at this conference.

"I am tremendously proud of Anita and Kaamilah. Their achievement shows that our students are able to compete with the best in the world at the cutting edge of information technology," says Professor Estelle Trengove, Head of School: School of Electrical and Information Engineering at Wits University.

Supervised by team advisors and computer engineers David Macleod and Matthew Cawood of the Centre for High Performance Computing (CHPC), the SA team took first place with the highest overall score for all the benchmarks they were given. Macleod, CHPC’s Advanced Computer Engineering Lab, said in a statement the team’s winning formula is to have dedicated students and sponsors. “Our sponsors are excellent and allowed the team to choose equipment without restriction or compromise. In turn the students put in a lot of time and effort before the competition and arrived at the competition well prepared.”

The Department of Science and Technology said in a statement that this “competition is one way that proves that South Africa will be able to fully participate in this new technological era and assist citizens to live better”.

“The skills that South Africa is building in supercomputing will help the country deal with the disruptive technologies that the fourth industrial revolution is promising,” said Dr Daniel Adams, Acting Deputy Director-General for Research Development and Support at the DST.