The Evidence for Contraceptive Options and HIV Outcomes study compared HIV acquisition risk among women given the injection, intrauterine device, or implant.

This pivotal clinical trial to address a long-standing question about the relationship between hormonal contraceptive use and the risk of HIV acquisition has found no substantial difference in HIV risk among 7,829 African women who were randomly assigned to use one of three highly effective methods of contraception.

The results of this randomised clinical trial, which was conducted by a research consortium led by FHI 360, the University of Washington, Wits Reproductive Health and HIV Institute (Wits RHI) and the World Health Organization (WHO), were announced on 13 June 2019, at the South African AIDS Conference in Durban, South Africa, and published simultaneously in The Lancet.

"After decades of uncertainty, we finally have high-quality scientific evidence about the potential relationship between three different types of contraceptives and the risk of HIV from a rigorous randomised clinical trial," says Professor Helen Rees, Executive Director of the Wits RHI and a member of the five-person ECHO Management Committee (MC) that leads the ECHO Study.

"The results of this study are reassuring, but our findings are also sobering, because they confirm unacceptably high HIV incidence among young African women irrespective of which contraceptive method they were assigned to," adds Reece, who also serves as Personal Professor in the Department of Obstetrics and Gynaecology at the University of Witwatersrand, Johannesburg, South Africa. 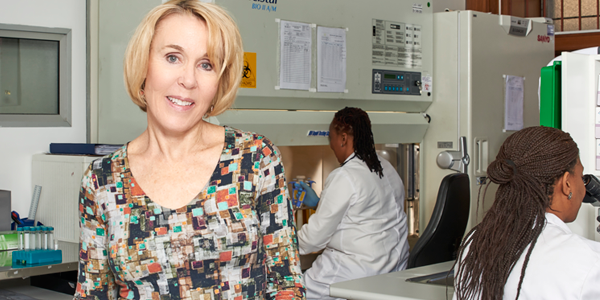 The cumulative evidence from observational studies conducted over 30 years has suggested that use of hormonal contraception — particularly DMPA-IM — may increase women’s risk of HIV acquisition by 40 to 50 percent. But uncertainty remained, because the available data were subject to the biases associated with observational studies. Few studies had examined whether hormonal implants or IUDs affected users’ risk of HIV acquisition.

Filling these gaps in the research is critical given the widespread use of DMPA-IM [Depo-Provera injectable contraception] in countries where HIV prevalence is high among women, explains Dr Nelly Mugo, Head of the Sexual, Reproductive, Adolescent and Child Health Research Programme at the Kenya Medical Research Institute in Nairobi, Kenya, and an MC member.

"In southern and East Africa, many women face the double jeopardy of high HIV prevalence and high maternal and infant mortality from unintended pregnancy," says Dr Mugo, who is also a Research Associate Professor in the Department of Global Health at the University of Washington in Seattle, USA. "Tens of millions of women in the region rely on DMPA-IM, which is often the most commonly used modern method of contraception in local family planning clinics."

ECHO Study findings: "The trial did not find a substantial difference in HIV risk among the methods evaluated: no method showed a 50 percent increase in HIV risk compared to the other two."

The ECHO Study began in December 2015, enrolling and following 7,829 sexually active, HIV-negative women ages 16 to 35 years across 12 clinical trial sites in Eswatini, Kenya, South Africa, and Zambia. Although women were randomly assigned to use one of the three methods, they could choose to switch methods or stop using contraception at any time.

The study achieved high standards of quality in clinical research: retention was 93.6 percent through to the final study visit and participants used their assigned contraceptive methods for 91.9 percent of follow-up time. The participants were sexually active women desiring reliable contraception who were recruited for no risk factors other than living in an area with high HIV prevalence. They received individualised counselling, condoms and other HIV prevention services during every study visit. Nevertheless, HIV incidence was high: 397 HIV infections occurred, or 3.81 percent per year.

The trial was designed to detect a 50 percent increase in new HIV infections for each of the three contraceptive methods compared to each other method. ECHO did not include a control group, because it would have been unethical to give participants who were seeking effective contraceptive a placebo or no method. Therefore, the study sought to answer the more relevant question for women: the comparative risks and benefits of several contraceptive options.

Of the 397 HIV infections that occurred, 143 were among women in the DMPA-IM group, 138 were in the copper IUD group and 116 were in the LNG implant group; HIV incidence per year by group was 4.19 percent, 3.94 percent and 3.31 percent, respectively. The trial did not find a substantial difference in HIV risk among the methods evaluated: no method showed a 50 percent increase in HIV risk compared to the other two.
All three study methods had high contraceptive effectiveness, with pregnancy rates of about 1 percent or less per year in analyses that excluded time off method. Only 7 percent of women experienced complications or side effects resulting in method discontinuation.

"We believe that these results support continued — and improved — access to all of the study contraceptive methods," says Dr Timothy Mastro, Chief Science Officer at FHI 360 in Durham, NC, USA, and an ECHO MC member. "Our collective experience shows that with adequate resources, provider training and support, and consistent supplies, these contraceptive methods can be provided safely and effectively at clinics in southern and East Africa. We hope that the ECHO results will be used to expand, not restrict, women’s options for contraception."

"The alarmingly high HIV incidence among study participants highlights the need for more aggressive efforts to prevent HIV and for integration of HIV prevention, including pre-exposure prophylaxis (PrEP), into contraceptive services," adds Dr Jared Baeten, Professor and Vice Chair of the Department of Global Health at the University of Washington Schools of Medicine and Public Health and an ECHO MC member. "Our results can help contraceptive providers and policy makers deliver high-quality, integrated, rights-based care. Even more important, the results can help women make informed choices about how to protect themselves from HIV and unintended pregnancy, but only if they have the information they need and the means to act on it."

The published results will be shared with WHO’s Guideline Development Group, which WHO will convene at the end of July 2019. This group will consider the most recent research on contraception and HIV risk, including the ECHO trial results, and determine whether any changes are needed to WHO’s Medical Eligibility Criteria, which serve as global guidance on contraceptive use. Recommendations will be issued by the end of August 2019.