Team confirms a 20-year-old prediction that “nature’s geometry” could be recreated by the use of laser technology.

We’ve all seen it before. The beautifully painted butterfly that appears when you spread open two sheets of paper, after covering them with paint and pushing them together. The geometrically shaped patterns of a shell of a tortoise, or the construction of the shell of a snail; the leaves of a succulent plant that repeat themselves over and over again, to create an intricate pattern; or the frost pattern on the windshield of a car after standing outside in winter. 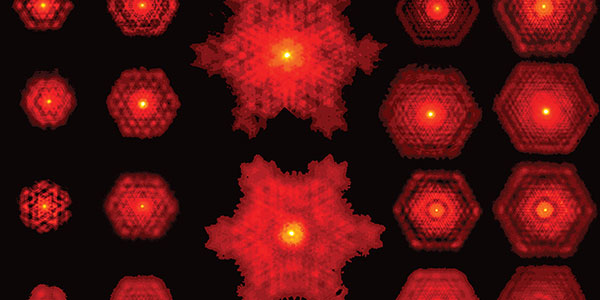 These patterns are all examples of fractals, the geometry of nature. Fractals are the complex shapes that we see every day in nature. They have the distinctive feature of a repeating geometry with a structure at multiple scales and are found everywhere – from Romanesco broccoli to ferns, and even at larger scales such as salt flats, mountains, coastlines, and clouds. The shape of trees and mountains is self-similar, so a branch looks like a small tree and a rocky outcrop like a small mountain.

For the past two decades, scientists have predicted that you could also create fractal light from a laser. With its highly polished spherical mirrors, a laser is almost the precise opposite of nature, and so it came as a surprise when, in 1998, light beams emitted from a class of lasers were predicted to be fractals. Now a team from South Africa and Scotland have demonstrated that fractal light can be created from a laser, verifying the prediction of two decades.

Reporting this month in the Physics Review, the team provide the first experimental evidence for fractal light from simple lasers and add a new prediction, that the fractal light should exist in 3D and not just 2D as previously thought.

Fractals are complex objects with a “pattern within a pattern” so that the structure appears to repeat as you zoom in or out of it. Nature creates such “patterns within patterns” by many recursions of a simple rule, for example, to produce a snowflake. Computer programmes have also been used to do so by looping through the rule over and over, famously producing the abstract Mandelbrot Set.

The light inside lasers also does this: it cycles back and forth, bouncing between the mirrors on each pass, which can be set to image the light into itself on each round trip. This looks just like a recursive loop, repeating a simple rule over and over. The imaging means that each time the light returns to the image plane it is a smaller (or bigger) version of what it was: a pattern within a pattern within a pattern.

Fractals have found applications in imaging, networks, antennas and even medicine. The team expects that the discovery of fractal forms of light that can be engineered directly from a laser should open new applications and technologies based on these exotic states of structured light.

“Fractals is a truly fascinating phenomenon, and is linked to what is known as “Chaos”,” says Professor Andrew Forbes, from the University of the Witwatersrand, who led the project together with Professor Johannes Courtial of the University of Glasgow. “In the popular science world, Chaos is called the “butterfly effect”, where a small change in one place makes a big change somewhere else, for example, a butterfly beating its wings in Asia causes a hurricane in the USA.  This has been proven to be true.”

In explaining the fractal light discovery, Forbes explains that his team realised the importance of where to look for fractals in a laser. “Look at the wrong place inside the laser and you see just a smeared-out blob of light. Look in the right place, where the imaging happens, and you see fractals.”

The project combined theoretical expertise from the Glasgow team with experimental validation in South Africa by Wits and CSIR (Council for Scientific and Industrial Research) researchers. The initial version of the experiment was built by Dr Darryl Naidoo (of the CSIR and Wits) and completed by Hend Sroor (Wits) as part of her PhD.

“What is amazing is that, as predicted, the only requirement to demonstrate the effect is a simple laser with two polished spherical mirrors. It was there all the time, just hard to see if you were not looking at the right place,” says Courtial.