MicroCT scans of the 3.67-million-year-old Australopithecus fossil known as Little Foot shed some light on how she lived and moved.

The inner ear of hominin fossils has the potential to provide valuable information about how the individual moved, what its hearing capacities were, and how the evolution of the species relates to others.

Based on MicroCT scans performed at the Evolutionary Studies Institute at the University of the Witwatersrand, a Wits scientist and colleagues have been able to virtually extract the inner ear of the ~3.67 million-year-old Australopithecus known as “Little Foot” from Sterkfontein Caves. A description of the inner ear by Wits researchers Dr Amélie Beaudet, Professor Ronald Clarke and their team was published today in the Journal of Human Evolution as part of a special issue of this journal on the near-complete Little Foot skeleton. 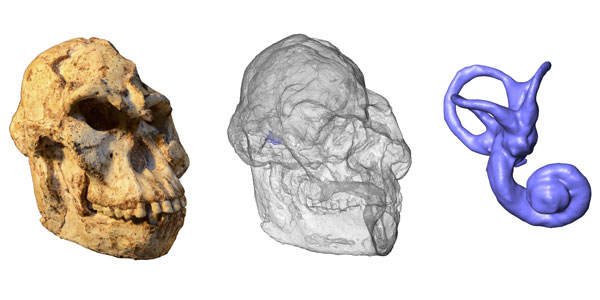 The inner ear of Little Foot was compared with 17 hominin specimens from Sterkfontein, Swartkrans and Makapansgat belonging to the genera Australopithecus, Paranthropus and Homo and dating between three and 1.8 million years ago, as well as with 10 chimpanzees and 10 modern humans.

Overall, Little Foot’s inner ear has both ape-like and human-like features, because the inner ear canals and the cochlea provided different results.

The semicircular canals in Little Foot’s are different from both modern humans and from Paranthropus – a genus of extinct hominins that lived at the same time as the first humans. The Paranthropus canals have a very specific shape that is not shared with any of the fossil specimens.

The study also shows a large diversity in the shape of the inner ear canals among Australopithecus species, which could suggest a high degree of variation in locomotor behaviour in this group.

“Our analysis of the inner ear might be compatible with the hypothesis that Little Foot and the Australopithecus specimens in general were walking on two legs on the ground but also spent some times in the trees,” says Beaudet.

Little Foot’s cochlea – a snail-like shaped part of the ear that receives sound in the form of vibrations – on the other hand is quite similar to other Australopithecus specimens in the study and to Paranthropus, but it differs with fossil Homo specimens.

“This organ is related to sound perception and to ecological factors such as diet, habitat or communication, which means that Little Foot differed in this regard with early member of our own genus, implying some difference in behaviour,” says Beaudet.

The dimension and shape of the cochlea are related to the range of frequencies that can be detected by a species. The shape of the cochlea of fossil Homo specimens is compatible with an extended low-frequency hearing limit. This was not the case for Australopithecus, including Little Foot, nor for Paranthropus.

“At the moment, we are not yet sure what this means. It may be that the early Homo species had to extend their range of frequencies for adapting to a different environment or perhaps even to communicate to each other. We don’t really know.”

Off all the comparisons of Little Foot to other specimens, the greatest similarity in the overall inner ear pattern was with a specimen from the Jacovec Cavern from the Sterkfontein Caves, that is of a similar age as Little Foot.

“Having a reference point such as comparing Little Foot to the Jacovec specimen is important in detecting which traits are specific to us (humans), and whether humans evolved more distinct characteristics. With this finding we now would be able to know what is specific to Homo and Paranthropus, and when these features emerged in the fossil record,” says Beaudet.