Despite the challenging economic conditions, the GCRO’s 5th Quality of Life Survey (2017/2018) show the overall quality of life in Gauteng continues to improve.

The Gauteng City-Region Observatory’s 5th Quality of Life Survey (2017/2018) survey also finds increases in residents’ satisfaction with all spheres of government in the recent period. 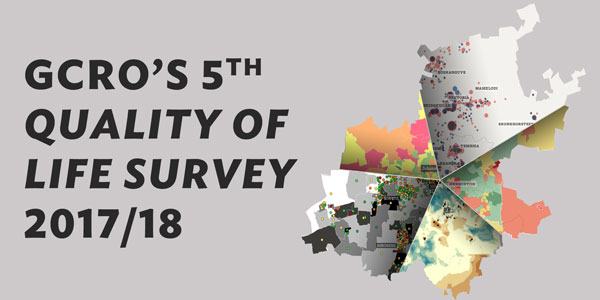 GCRO has run its Quality of Life survey every two years since 2009. This iteration interviewed 24 889 respondents across Gauteng. The results were launched at a high-profile event held today at the University of Johannesburg. The event was attended by Gauteng Premier David Makhura who also responded to the results.

GCRO Executive Director, Dr Rob Moore, said on the release of the survey’s findings, “Economic conditions are clearly very challenging at the moment, with GDP per capita lower than it was ten years ago, and unemployment nearing 30%. In spite of this, our survey shows steady improvement in overall quality of life over time.

Despite continued high levels of population and household growth in Gauteng, the QoL survey shows that levels of access to services have remained stable. “Access to piped water to homes and yards has remained above 90% over the decade that the survey has been conducted,” Dr Moore said. “This tells us that government is broadly keeping pace with increases in demand for service connections. However, there are signs that provision of services has deteriorated significantly in some municipalities, while delivery has improved in others. This reflects in different levels of satisfaction with local government.

“Our results show that, of the major cities, Ekurhuleni is doing well and Johannesburg has marginally improved in many service areas. Smaller municipalities like Lesedi and Midvaal are also up since the last survey in 2015/16, but Emfuleni has seen significant declines in the area of refuse collection, and satisfaction with that municipality is down. Tshwane also seems to be struggling in a number of areas.”

With just under 25 000 people interviewed across Gauteng’s 529 wards, the 2017/18 Quality of Life Survey is one of the biggest social attitudes surveys in sub-Saharan Africa. The survey takes a multi-dimensional approach to defining what constitutes quality of life and provides data on a wide range of topics including: access to, and satisfaction with, basic services; satisfaction with government; transport and mobility; livelihoods; migration; neighbourhood, community and family dynamics; race and gender relations; health and well-being; and political and social values and attitudes.

Levels of satisfaction with government services have varied, with some service areas showing improvements and some declines since the last Quality of Life survey in 2015/16.

However, Dr Moore pointed out that Ekurhuleni is outperforming the other metros on most service measures. “In important areas like cost of municipal services, billing, and waste, the province as a whole has seen big declines in resident satisfaction. This includes declines in satisfaction with costs of services and billing in Johannesburg and Tshwane. By contrast, residents of Ekurhuleni are much more satisfied with costs, billing and waste than in the last survey.”

Reflecting weak economic conditions, only 19% of respondents are satisfied with government initiatives to grow the economy. Satisfaction with public health services is also down overall, from 65% satisfied in 2015/16 to 57% in 2017/18. “This may reflect how the Life Esidimeni tragedy has seeped into public perceptions of health services, rather than a province-wide deterioration in health provision,” Dr Moore said.

Previous iterations of the survey have shown that overall satisfaction with government is typically lower than satisfaction with the essential services that government provides, and the 2017/18 results are no different. While many service measures like water or energy show satisfaction levels in the region of 70% or 80%, only 37% of respondents are satisfied with local government. According to Dr. Moore, “It is a feature of public sentiment that attitudes to local government are coloured by a range of factors beyond basic service delivery. This is a general condition where government is often held accountable for issues or conditions that are beyond its immediate mandate or control.”

Across Gauteng, respondents report that the three biggest problems in their communities are crime (32% of respondents), unemployment (18%), and drug and alcohol abuse (16%).

Measured as a whole through a ‘Quality of Life index’ made up of 58 different variables, overall quality of life has increased from a value of 6.02 (out of a possible 10.0) in 2011 to the current value of 6.30, which represents a significant shift in the right direction. Dr. Moore notes that this improvement is in the face of difficult economic conditions and continued high in-migration.

“Some dimensions of the index, such as a group of variables dealing with ‘Work’, keep pulling the index down. For example, there have been 7% declines in the percentage of respondents saying, respectively, that are satisfied with their standard of living and satisfied with working conditions in their jobs. However, other variables have jumped higher, pulling the index up. For example, there was a 14% increase in the percentage of respondents saying others in their community can be trusted, an 11% increase in those saying it is important to look after the environment, and a 27% jump in the percent participating in community organisations and clubs. All these variables have pushed up the ‘Community’ dimension of the index dramatically.”

Commenting on the value of the QoL data in assisting policymakers to tackle socio-economic challenges, Dr Moore observed, “As an independent, trusted and respected survey, the QoL data is highly valued by government, civil society and academic researchers. The data is both demographically and spatially representative. This allows local, provincial and national Government to use the data for policy and decision making, target setting, and to gauge success in their implementation of initiatives. Both provincial and local government are increasingly making use of this data to respond proactively to different issues that arise in particular places.”

About the Gauteng City-Region Observatory (GCRO)

The GCRO is a research institute that helps to build the knowledge base that government, business, labour, civil society and residents all need to make the Gauteng City-Region competitive, spatially integrated, environmentally sustainable and socially inclusive. The GCRO collects data and benchmarks the city-region; provides policy analysis and support; undertakes applied research; publishes critically reflective academic work; and participates in international conferences and exhibitions. GCRO is a partnership between the Gauteng Provincial Government, the University of Johannesburg, the University of the Witwatersrand (Johannesburg), and organized local government in Gauteng (SALGA-Gauteng).