Collaboration on Fundamental Physics celebrates a decade, of among others, Wits’ involvement in accelerated technology development.

The 10-year celebration of the partnership between the South African physics community and CERN, the European Organisation for Nuclear Research, is being celebrated at the iThemba Laboratory for Accelerator-Based Sciences (iThemba LABS) in Cape Town, from 19 to 21 November 2018.

The event attracted a full house on its first day, with the French and Swiss Ambassadors to South Africa, the Vice-Chancellors of the Universities of Cape Town and the Witwatersrand, and a number of internationally renowned physicists attending. 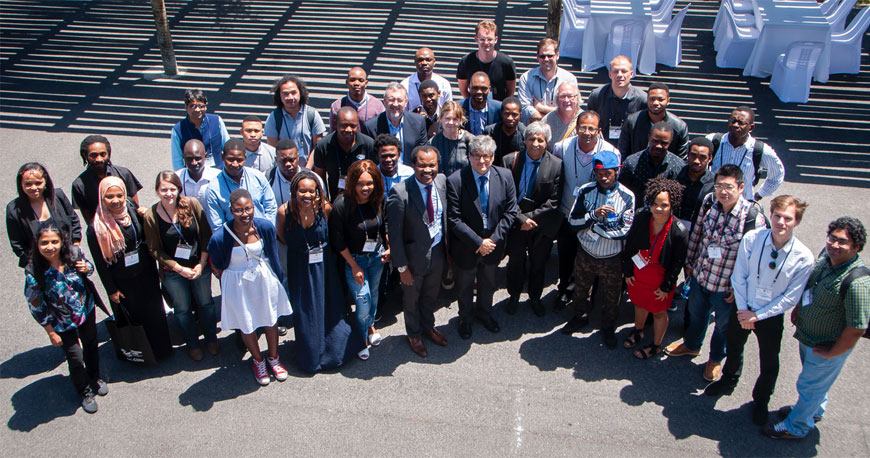 IThemba LABS, a research facility funded by the Department of Science and Technology through the National Research Foundation, employs senior scientists dedicated to the SA-CERN programme and offers world-class infrastructure and administrative support.

Founder of the SA-CERN Programme, Prof. Zeblon Vilakazi, said the partnership received support at the highest levels, with a recent visit from the Minister of Science and Technology, Mmamoloko Kubayi-Ngubane.

Professor Vilakazi said that, since the launch of the programme, South Africa had established a solid presence at CERN. Over the past decade, SA researchers have contributed to major breakthroughs at the global facility, including the historical discovery of the Higgs boson particle in 2012.

Dr Zinhle Buthelezi, a Senior Researcher at iThemba LABS, who benefited from the collaboration at postgraduate level, said that the experience had been life-changing, and praised the Department of Science and Technology for funding the SA-CERN initiative. She also welcomed the Department's expansion of the initiative to include software and hardware engineering, which holds huge benefits for local students.

The Department's Deputy Director-General: Research Development and Support, Dr Thomas Auf der Heyde, said that the initiative has contributed significantly to the growth of the physics community in South Africa.  South African papers in the sub-fields of nuclear, particle and field physics increased to between 2,5 and 3 times the global average, while the overall standing of work in applied, fluid, plasma, atomic and mathematical physics remained unchanged. Racial demographics have also improved, although gender representivity remains skewed in favour of men, with only 12% of publications attributed to women.

Dr Auf der Heyde said that the partnership between CERN and South Africa, as well as between South Africa and the Joint Institute for Nuclear Research in Russia, had contributed to strengthening nuclear-related physics in South Africa.

The partnership with CERN has also accelerated technology development, enhancing both technological and social innovation, and providing advanced scientific training for new generations of scientists and science managers.  Partnerships around global infrastructures such as CERN allow South African research to benchmark itself against its global partners and rivals, thereby establishing an objective perspective on its standing in the global world of science.

Over the past three years, the total number of postgraduate students has increased from about 30 to over 50, and is expected to grow to more than 80 in the next few years. The master's and doctoral degrees are of the highest international standing and all students who have graduated so far have been able to find employment in South African universities and research councils, as well as various private sector institutions (including some in the financial services sector). Owing to the CERN collaboration, there have been instances where South Africa has retained skilled scientists that might otherwise have been lost to the African Science Diaspora.

Dr Auf der Heyde said that there were ongoing discussions with the National Research Foundation about bursaries dedicated to the SA-CERN programme.

The number of visits for students (including postdoctoral fellows) is expected to treble from 2013 to 2019.  Being part of a large collaboration exposes students and researchers to an international group sharing a very high standard of science, and the most advanced techniques and latest advances in software.

The growth experienced in academic, technical, and scientific staff and postdoctoral fellows who have been through the SA-CERN programme over the past few years of this partnership bodes well for growing South Africa's national competence to manage and promote a wide range of computationally and theoretically intense domains and projects, such as the Square Kilometre Array project, the Centre for High Performance Computing (and the SA-GRID initiative), the Radioactive Ion Beam project at iThemba, and the High Throughput Electronics Facility project at the University of the Witwatersrand.

These projects and others have benefited from an infusion of skills from students trained at CERN and researchers participating in CERN experiments, it is expected that this valuable cross-over of skills will continue.