Researchers from the Wits School of Geosciences were involved in locating the fall area of the meteorite in Botswana’s Central Kalahari Game Reserve.

On Saturday, 23 June, a fresh meteorite was recovered in Botswana’s Central Kalahari Game Reserve (CKGR). It is one of the fragments of asteroid 2018 LA which collided with Earth on the 2nd of June, turned in a meteor fireball and detonated over Botswana a few seconds after entering the atmosphere, an event witnessed by a number of spectators in South Africa and Botswana and captured on numerous security cameras in these two countries.

The asteroid 2018 LA was discovered in space eight hours before hitting Earth by the Catalina Sky Survey, operated by the University of Arizona and sponsored by NASA as part of its Planetary Defense mission. It is only the third time in history that an asteroid inbound to hit Earth was detected early and only the second time that fragments of it could be recovered. 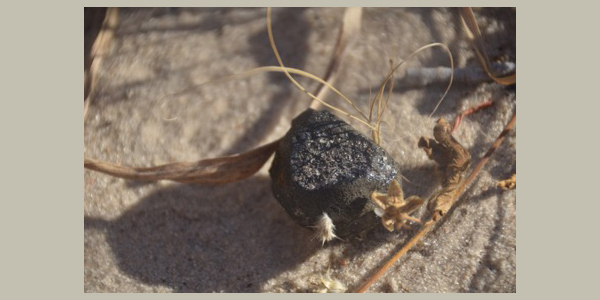 After disruption, the asteroid fragments scattered over a wide area, blown by the wind while falling down. Calculations of the landing area were done independently by a US-based group headed by Peter Jenniskens, a subject expert of the NASA-sponsored SETI Institute in California, as well as Esko Lyytinen and Jarmo Moilanen of the Finnish Fireball Network (FFN). These calculations were defining the fall area well enough to warrant the deployment of a search expedition.

“The biggest uncertainty we faced was to determine where exactly the meteorites fell,” says Peter Jenniskens, who traveled to Botswana to assist in the search. He teamed up with Oliver Moses of the University of Botswana’s Okavango Research Institute (ORI), to gather security surveillance videos in Rakops and Maun in Botswana, to get better constraints on the position and altitude of the fireball’s explosion.

The first meteorite was found after five days of walking and scouring a landscape of sand, thick tall grass, shrubs and thorn bushes by a team of geoscientists from the Botswana International University of Science and Technology (BUIST), the Botswana Geoscience Institute (BGI) and ORI. The Botswana Department of Wildlife and National Parks granted access and deployed their park rangers to provide protection and participate in the search. 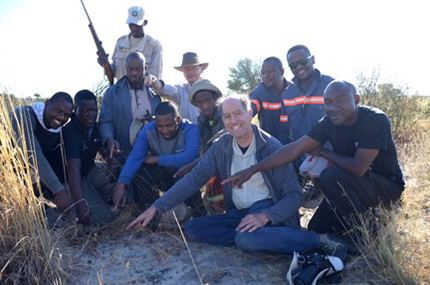 “As geologists from BIUST we see it as our mandate and duty to respond quickly to events like this one and to recover the material, both for research purposes and as part of the heritage of Botswana,” explains Professor Alexander Proyer, leader of the joint expedition. “Searching for a meteorite in 200 square kilometers of uncharted wild is already a complex operation, and when you do so in a park teeming with elephants, lions and snakes, it makes your task even a bit more challenging.”

“Meteorites are protected under Botswana law,” says Mohutsiwa Gabadirwe, senior curator of the Botswana Geoscience Institute, who coordinated the access to the protected fall area in the game reserve. “This meteorite is a priceless piece of rock that the people of Botswana will want to enjoy seeing on display for generations to come.”

Future study of this meteorite may reveal where dangerous asteroids of this type originate in the asteroid belt. “We need to study the material properties of these small asteroids to be able to predict the possible asteroid impact threat in the future,” emphasizes Tomas Kohout of the FFN and the University of Helsinki, who also arrived in Botswana to join the team, as the search for more fragments of the meteorite continues.

Explosions of larger asteroids entering the Earth’s atmosphere can release far more energy than the strongest nuclear bombs. “Since the collision of the fragments of the comet, Shoemaker-Levy 9, into Jupiter in 1994, where the fragments created holes in Jupiter’s atmosphere that are the size of the Earth, the international political leadership has started a process to set up a land- and satellite-based scanning system to map out the asteroids that could potentially cross Earth’s orbit,” says Professor Roger Gibson, Head of School at the School of Geosciences at the University of the Witwatersrand in Johannesburg, South Africa, who also assisted in locating the fall area.

“We have to know the material properties of the objects that are about to hit Earth,” explains Professor Proyer. “In order to devise and chose the appropriate planetary defense measure. This is possible only if we can connect the properties from remote observation with the explosion behavior and the material fallen to the ground. This event and the recovered meteorites are only our second opportunity to do so.”

“We as scientists are totally excited about getting a free-of-charge delivery of material from remote space that would otherwise require a highly expensive space mission to recover,” says Dr Fulvio Franchi of BIUST, leader of the follow-up search team, emphasizing the scientific value of the meteorite.

The meteorite samples will be curated by the Botswana National Museum and investigated further by a research consortium including scientists from Botswana, South Africa, Finland, and the USA.