First tetrapods of Africa lived within the Devonian Antarctic Circle

Fossils of two new species of these four-legged vertebrates also evolved in polar regions, and not just in the tropics as previously believed. 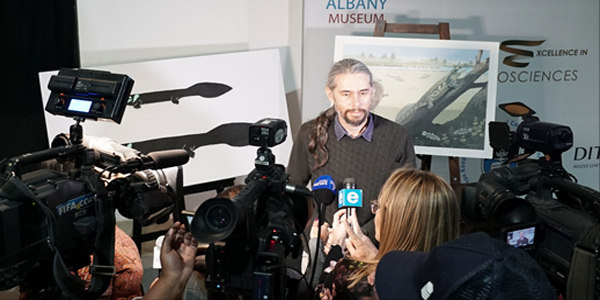 The first African fossils of Devonian tetrapods (four-legged vertebrates) show these pioneers of land living within the Antarctic circle, 360 million years ago.

The evolution of tetrapods from fishes during the Devonian period was a key event in our distant ancestry. New-found fossils from the latest Devonian Waterloo Farm locality near Grahamstown in the Eastern Cape, South Africa, published today in Science, force a major reassessment of this event. “Whereas all previously found Devonian tetrapods came from localities which were in tropical regions during the Devonian, these specimens lived within the Antarctic circle,” explains lead author, Dr Robert Gess of the Albany Museum in Grahamstown, and co-author Professor Per Ahlberg of Uppsala University in Sweden. The research was supported by the South African DST-NRF Centre of Excellence in Palaeosciences, based at the University of the Witwatersrand and the Millennium Trust.

Two new species, named Tutusius and Umzantsia, are Africa’s earliest known four-legged vertebrates by a remarkable 70 million years. The approximately metre-long Tutusius umlambo (named in honour of Archbishop Emeritus Desmond Tutu) and the somewhat smaller Umzantsia amazana are both incomplete. Tutusius is represented by a single bone from the shoulder girdle, whereas Umzantsia is known from a greater number of bones, but they both appear similar to previously known Devonian tetrapods. Alive, they would have resembled a cross between a crocodile and a fish, with a crocodile-like head, stubby legs, and a tail with a fish-like fin.

The Waterloo Farm locality (where the tetrapods were discovered) is a roadcut first revealed in 2016 after controlled rock-cutting explosions by the South African National Roads Agency (SANRAL) along the N2 highway between Grahamstown and the Fish River. This cutting exposed dark grey mudstones of the Witpoort Formation that represent an ancient environment of a brackish, tidal river estuary that contain abundant fossils of animals and plants. 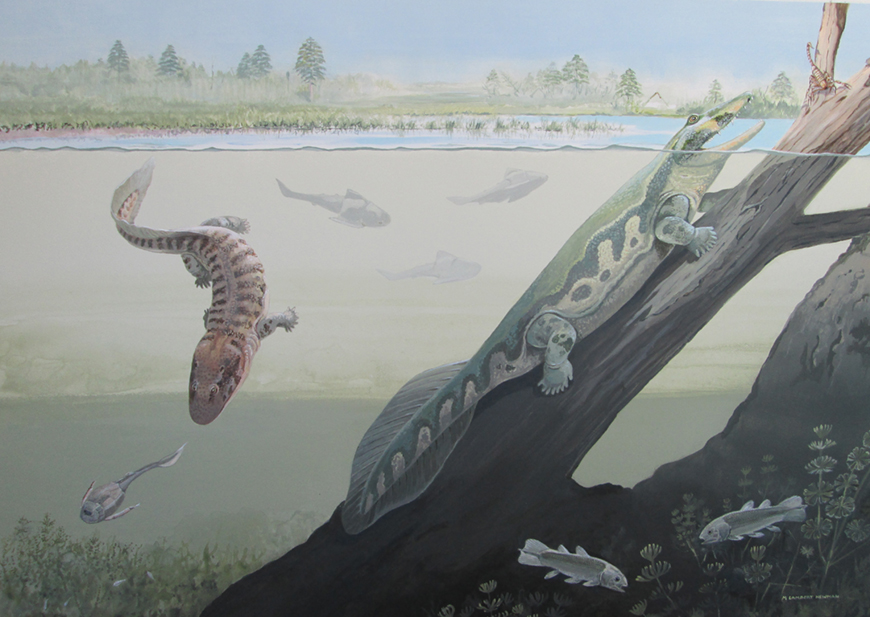 The first tetrapod found outside of tropical regions

The real importance of Tutusius and Umzantsia lies in where they were found.

Devonian tetrapod fossils are found in widely scattered localities. However, if the continents are mapped back to their Devonian positions, it emerges that all previous finds are from rocks deposited in the palaeotropics – between 30 degrees north and south of the equator. Almost all come from Laurussia, a supercontinent that later fragmented into North America, Greenland and Europe.

The much larger southern supercontinent, Gondwana, which incorporated present-day Africa, South America, Australia, Antarctica, and India, has hitherto yielded almost no Devonian tetrapods, with only an isolated jaw (named Metaxygnathus) and footprints, being found in eastern Australia. Because Australia was the northernmost part of Gondwana, extending into the tropics, an assumption developed that tetrapods evolved in the tropics, most likely in Laurussia. By extension it was assumed that movement of vertebrates from water onto land (terrestrialisation) also occurred in the tropics. Attempts to understand the causes of these major macroevolutionary steps therefore focussed on conditions prevalent in tropical water bodies.

The Waterloo Farm tetrapods not only come from Gondwana, but from its southernmost part: reconstructed to have been more than 70 degrees south, within the Antarctic circle. Abundant plant fossils show that forests grew nearby, so it wasn’t frozen, but it was definitely not tropical and during winter it will have experienced months of complete darkness. This finding changes our understanding of the distribution of Devonian tetrapods. We now know that tetrapods occurred throughout the world by the Late Devonian and that their evolution and terrestrialisation could realistically have occurred anywhere.

South Africa now adds insights into the emergence of land animals to its incredible fossil record, which also includes transition to mammals from reptile-like ancestors and the evolution of humans. There is probably not another country on the planet that so fully documents the long and dramatic evolutionary history of our own lineage.