Whose water is it anyway?

Water security in Gauteng relies on an apartheid-era treaty that forces Lesotho to provide water to South Africa, despite climate change threatening Lesotho’s ability to deliver.

Lesotho is a country blessed with an abundance of water. Consequently, in 1986, the South African apartheid government and the government of Lesotho signed the Lesotho Highlands Water Project (LHWP) treaty. This agreement stipulates that Lesotho supplies South Africa with water in exchange for royalty payments, which Lesotho must use to build dams that generate electricity. 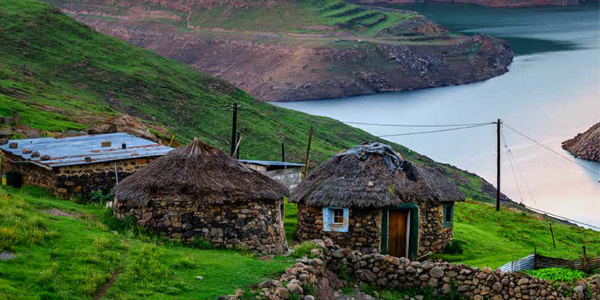 Gauteng currently receives the majority of its water supply from the Mashai reservoir (phase I) via the Vaal River. The province’s future water security is heavily reliant on the completion of the latter phases of the project.

Research by Clive Vinti, a PhD candidate in Environmental Law, investigates how this treaty has enabled South Africa to take over Lesotho’s water resources. He describes this phenomenon as ‘hydrocolonisation’.

“The term describes the unlawful appropriation and control of water resources of a certain group or community,” says Vinti.

The terms of agreement in the treaty threaten the smaller partner, Lesotho, because the country cannot guarantee an infinite water supply to South Africa due to the impact of climate change on Lesotho’s riverbanks.

“In the agreement, Lesotho has to supply South Africa with predetermined amounts of water. There can be no deviation in the agreement of the provision of water. You cannot impair the terms of the contract. Even though we have reached an agreement with Lesotho to give us water, there is a possibility that – with climate change – there is going to be less water available in the Orange River,” says Vinti.

Despite the treaty, Lesotho gives preference to its domestic water needs before delivering water to its neighbour. Section 5 of the 2008 Lesotho Water Act prioritises domestic use of water over any other use. Section 6 states that, in cases of a declaration of a water emergency, the Minister of Water ‘may direct that any persons who have a supply of water in excess of domestic water make available such quantity to other uses as the Minister may specify’.

“What will happen the day Lesotho cannot meet its water commitments towards South Africa? The day is going to come when Lesotho has to decide whether it gives South Africa the water, or it gives its own citizens the water. Ultimately, this treaty will impede access to water for local citizens of Lesotho,” says Vinti, who argues that the LHWP treaty does not comply with international water law.

“It is imperative that South Africa and Lesotho amend this agreement to comply with these principles. Both the South African and Lesotho Water Acts are premised on equity, access and fairness,” says Vinti, but access and equity is not guaranteed for Lesotho as it is for South Africa in terms of the treaty, given Lesotho’s legal predicament.

According to Vinti, South Africa has colonised Lesotho’s water. “The way the agreement operates is simply colonisation of Lesotho’s water resources. Lesotho has no bargaining power.”