Wits PhD student finds a way to control the spin transport in networks of the smallest conductor known to man.

Researchers at the University of the Witwatersrand have found ways to control the spin transport in networks of the smallest electrical conductor known to man. 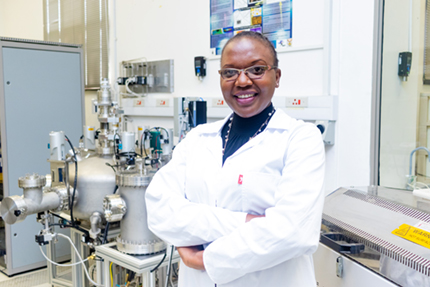 By chemically attaching nano-particles of the rare earth element, gadolinium, to carbon nanotubes, the researchers have found that the electrical conductivity in the nanotubes can be increased by incorporating the spin properties of the gadolinium which arises from its magnetic nature. To put it plainly the presence of a magnet in an electron transfer media introduces another degree of freedom that enhances the electron transfer but only if tailored precisely.

Discovered in Japan in 1993, carbon nanotubes are the thinnest tubes in the universe, consisting of a cylinder of single carbon atoms. At the time of its discovery it was revolutionary, and it was expected that it could replace silicon in electronic circuits, such as microchips and computer hard drives.

“Carbon nanotubes are known for their ability to carry a high amount of electrical current and they are very strong. They are very thin but electrons can move very fast in them, with speeds of up to Gigahertz or Terahertz, and when coupled to nanomagnets they greatly extend the functionality of the carbon nanotubes, which is required to advance modern technology through the development of high speed spintronic devices,” says Siphephile Ncube, a PhD student at the Wits School of Physics and the lead author of the study. Her research was published in Scientific Reports on Wednesday (23 May 2018).

During her PhD, Ncube collaborated with a team of researchers from the University of the Witwatersrand, University of Johannesburg and the Paul Sabatier University in France. The researchers chemically attached gadolinium nanoparticles on the surface of the carbon nanotubes to test whether the magnetism increases or inhibits the transfer of electrons through the system. The measurements to interrogate the effect of magnetic nanoparticles on a network of multi-walled carbon nanotubes were carried out at the Nanoscale Transport Physics Laboratory (NSTPL) at Wits. This facility is dedicated to novel nano-electronics and it was initiated by the NRF Nanotechnology flagship programme.

“We found that the effect of the magnetic nano-particles is read off in the electronic transport of the nanotubes. Due to the presence of the magnet the electrons become spin polarised and the charge transfer is dependent on the magnetic state of the gadolinium. When the overall magnetic poles of the gadolinium are oppositely aligned, it causes higher resistance in the nanotubes and slows down the flows of electrons. When the magnetic poles are misaligned, it has a low resistance, and assists the electron transport,” says Ncube. This phenomenon is known as the Spin Valve Effect, which finds wide application in the development of hard disk drives used for data storage.

Ncube started her research on carbon nanotubes as a Master’s student at the Wits School of Physics in 2011, where she made single walled carbon nanotubes, by establishing a laser synthesis technique. Her work, which led to the publishing of various research articles in the field, was performed on instruments from the CSIR National Laser Centre Rental Pool Programme. She is also the first researcher in Africa to build an electronic device that can measure the electron transfer properties of the carbon nanotubes coupled to magnetic nanoparticles. She was funded by the DST-NRF Centre of Excellence in Strong Materials.

“Ncube’s research established the great potential of carbon nanotubes for ultra-fast switching device and magnetic memory applications, a realisation we have been working towards since the establishment of the NSTPL facility in 2009,” says Ncube’s PhD supervisor, Professor Somnath Bhattacharyya. “To date, modified nanotubes have demonstrated good spin transport for devices made from individual nanotubes. For the first time we have demonstrated spin mediated electron transport in a network of nanotubes without incorporation of magnetic leads.” The project is part of the objectives outlined in the NRF Nanotechnology flagship program.