Bruce Mellado, National Contact Physicist of South Africa at the ATLAS experiment at CERN, says there are future plans for a bigger, better LHC.

The Large Hadron Collider (LHC) at the European Organization for Nuclear Research (CERN) has provided one of the most important discoveries in the world of physics, when the observation of the Higgs boson was made in 2012. And, while it will continue to operate as one of the worlds’ largest science experiments until well into the 2030s, scientists are already asking questions about what should come next. 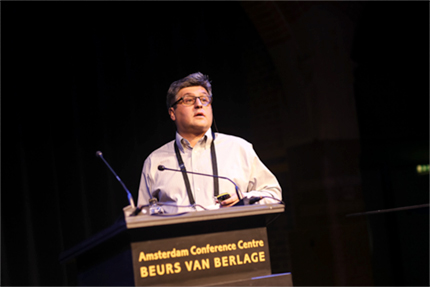 Professor Bruce Mellado is the National Contact Physicist of South Africa at the ATLAS experiment at CERN and holds a dual appointment at the University of the Witwatersrand and iThemba LABS of the NRF. He supports the idea to build an accelerator that would be almost four times the size of the current LHC, which, at the moment is the world’s largest and most powerful particle accelerator.

“The LHC was critical in providing evidence for the existence of the Higgs boson, and the Higgs boson gives us an understanding of the origin of matter, but this is just the tip of the iceberg,” says Mellado.

Mellado was asked to present a plenary talk to about 500 physicists in Amsterdam, Holland, in April, where the scientists gathered to discuss the prospects for a new, more powerful accelerator. His talk on the opening day of the conference, was attended by the Director General of CERN, Dr Fabiola Gianotti, as well as other leading members of the international High Energy Particle Physics community.

The new proposed particle accelerator, called the Future Circular Collider (FCC), which would also be built by CERN, is envisaged to have an underground tunnel of 100km long, compared to the 27km tunnel of the current LHC.

Particle accelerators are massive structures with long underground tunnels where particles such as protons are collided against each other at very high energies, using a complex system of magnets and accelerating devices. As the biggest accelerator to date, the LHC has become the quintessential Big Science project.

“By colliding the particles against each other at speeds close to the speed of light, we physically break up these particles to see what they are made of,” says Mellado.

Matter is made of atoms with a nucleus made of neutrons and protons. By colliding particles at high energies it was shown that protons can be broken up into a number of various “building blocks”, such as quarks and gluons.

Mellado, like his colleagues, believes that building a bigger accelerator can provide evidence that even these structures can be broken up further.

“Quarks are currently believed to be elementary particles, but we think that if we take a closer look at higher energies we may see that quarks also have structures,” says Mellado.

In order to do this, we need the most powerful microscope that has ever been devised. This is one of the roles that the proposed FCC would be suitable for.

“By colliding electrons at high velocities at a target, like a proton, it works like a microscope, where you can zoom in closely into the structure of matter. The higher energy you have, the more you can zoom into the structure of the proton.” The increased energy would be provided by the increased length and more powerful magnets that the FCC would have. 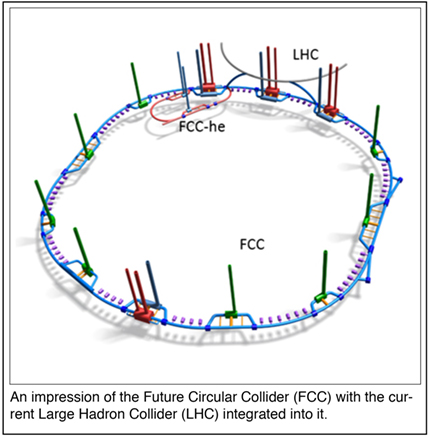 In his talk, Mellado – who has published a number of seminal papers on the advantages of electron-proton collisions, including in the prestigious Physics Review Letters – discussed the possibility of attaching a small accelerator of electrons to the FCC that would create head-on collisions with the protons, to happen at the same times as proton-proton collisions.

Particle physicists are not only interested in what particles are made up of, but also how particles are created. According to Albert Einstein’s theory of relativity, E=MC2, matter (particles) can be created when you have large amounts of energy. One of the ways to do this, would be to collide two proton particles against each other. The large amounts of energy released in this collision means that new forms of matter could be created.

“Our ability to accelerate particles is very small in comparison to what is needed to explore the Universe, so our understanding of the Universe is very limited,” says Mellado. “With the FCC, we can take another step towards understanding nature better.”

While it may seem early to be talking about the future of the LHC beyond its lifetime, when it is still expected to be operating into the 2030s, Mellado says there is no time to spare.

“The first serious discussion about the LHC took place in 1984 and it started routine operations in 2010,” says Mellado. “The construction of such a complex facility required careful planning and designing, so we need to start talking now about the future of accelerators.”