Wits students contribute to the upgrade of the high-tech software and hardware at the CERN ATLAS detector.

In 2012, the world was astonished by the announcement of the discovery of the Higgs boson at the Centre for Nuclear Reseach (CERN) in Switzerland. That announcement completed physicists understanding of what we know of the part of our world that we can see and feel­­­­­­­­­­­­­­­­, namely normal matter.

The discovery of the Higgs boson, however, inspired the worlds’ physicists into a whole new world of study, searching for the answers to the mysteries of the things in our universe that we cannot see.

“Normal matter, in other words, the things that we can see and feel around us comprises only about 4% of what is actually in the universe. While we know that there is a lot of matter and energy out there we do not really know what it is and how it is related to the known matter.” says Professor Bruce Mellado, the National Contact Physicist of South Africa at the ATLAS experiment at CERN from the School of Physics at the University of the Witwatersrand. 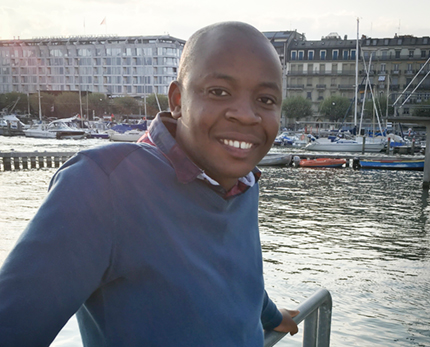 The Department of Science and Technology funds the South Africa CERN (SA-CERN) consortium. This avenue is essential for South African students and researchers to access this leading global research infrastructure.

Wits is the single largest contributor from South Africa to CERN. This includes theoreticians and experimentalists together with a  group of 35 students from a wide variety of historical and financial backgrounds that are highly involved in the search for new bosons. These students from Wits University spend significant amount of time at CERN, where some of them play an active role in the upcoming upgrading of the ATLAS particle detectors, that is situated in the Large Hadron Collider (LHC). The LHC will be upgraded in 2023-2024 to increase its sensitivity in order to enhance the potential for new discoveries.

“The LHC is the largest particle accelerator in the world, and it is used to accelerate two high energy particle beams in opposite directions in a circular route, and set them on a collision course with each other,” says Ntabiseng Lekalakala, an M.Sc. student from Wits University, who is now based at CERN.

“By colliding the particles against each other at speeds close to the speed of light, we physically break up these particles to see what they are made of.”

These collissions happen at a rate of one every 25 nanoseconds (a nanosecond is one thousand-millionth of a second).

Dingane Hlaluku, a student at the Wits School of Physics, is working on the software upgrade of the detector. He completed his Masters in Physics at Wits in 2017 and has developed a keen interest in software engineering of largely distributed systems. In October 2017, he was invited to deliver a plenary presentation on the status of the detector upgrades to the Tile Calorimeter of the ATLAS experiment – which included some of the world’s top physicists in High Energy Physics. 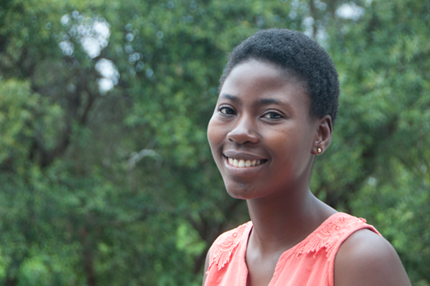 “Dingane giving a plenary presentation summarising the upgrade activities of the Tile Calorimeter of the ATLAS detector was a honour to us all,” says Mellado.

One of the biggest challenges at the ATLAS experiment is to sift through the huge amounts of big data that the experiment delivers, and to only capture the relevant data. This is where Dingane’s software update plays a crucial role.

After the upgrade, the readout electronics will need to cope with digital data with full granularity at about 40 MHz, which means the electronics will need to process data at a minimum rate of 9.6 Gigabytes per second to the off-detector readout components. This is equal to downloading three full feature-length Blueray DVDs per second. The off-detector electronics that is used to control, configure and monitor the process will be required to send data at a rate of about 4.8 Gigabytes per second.

“The software is augmented to look for specific signatures from different regions of the detector in three stages/levels and discard uninteresting events in real-time.” says Hlaluku.

In the current configuration of the detector, data is processed, digitized and read out at 100 KHz.

The fourth annual High Energy Particle Physics (HEPP) workshop took place this January 21st to February 2nd at the Wallenberg Research Centre at Stellenbosch. Professor Alan Cornell, from Wits University and a co-chair of the workshop has been instrumental in the growth of the field in South Africa. “It is great to see so many new students choose to do research in our field. The attendance of this year’s HEPP workshop is double that of three years ago,” says Cornell.

Another Wits student who is contributing to the upgrade of the hardware for the ATLAS detector is twenty-four-year-old PhD student Joyful Mdhluli.

Mdhluli has been involved in the ATLAS experiment at CERN for two years. The experience has changed her life. 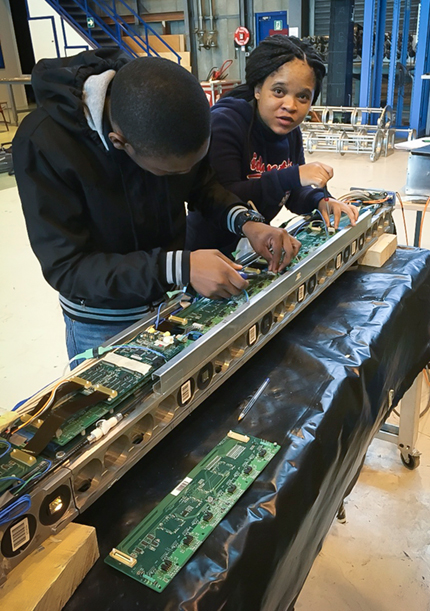 “I’ve been able to attend lots of conferences, where I’ve met different kinds of people from different parts of the world, and I’ve also learnt a lot about High Energy Physics,” she says.

“I realised that High Energy Physics basically involves a lot of interesting stuff, like astronomy and dark matter.”

Mdhluli’s research is on trying to find materials that can withstand the high levels of radiation for parts of the ATLAS detector.

“If you want to study particles beyond the standard model, you need to get efficient and accurate data, so if the materials in the detectors deteriorate over time, then that means the signals that they get over time are not reliable. So, we are trying to make it as efficient as possible by making sure that the materials they are using will be able to last long periods and will have reliable signals coming through,” she says.

Wits’ involvement at CERN has already led to actual technological innovation in South Africa, where the Cape Town-based company Trax Interonnect built a new 16-layer electronics board specifically for the ATLAS detector upgrade. This board was until recently the most complex printed circuit board ever produced in South Africa.

“The production of the board for ATLAS was a challenge. Since then, we have improved on our own capabilities and now we are able to produce even more complex boards,” says Daniel Dock, Managing Director of Trax Interconnect.

Speaking at the HEPP workshop in Stellenbosch, Mathis Wiedeking of iThemba Laboratories said that South Africa has a long standing collaboration CERN.

“Student training and the education of our next generation scientists is a top priority and a foundation for research development. South Africa plays a visible role in this field of research and contributes quite significantly,” he said. “The SA-CERN consortium has the capacity to attract young people and get kids interested in science, and it plays a huge role in sparking the interest in sience and technology among young South Africans.”

Mellado agrees. “Our collaboration with CERN provides us with an excellent opportunity to develop human capacity in areas of high-tech that are badly needed in South Africa, contributing to the training of a new generation of leaders. Technology transfer to South African industry is an important by-product of this interaction,” says Mellado.