CT-scan study of Wits PHD student makes it possible to 3D print the skull of the dinosaur species Massospondylus that roamed South Africa 200 million years ago.

The digital reconstruction of the skull of a 200-million-year-old South African dinosaur, Massospondylus, has made it possible for researchers to make 3D prints and in this way facilitate research on other dinosaurs all over the world. 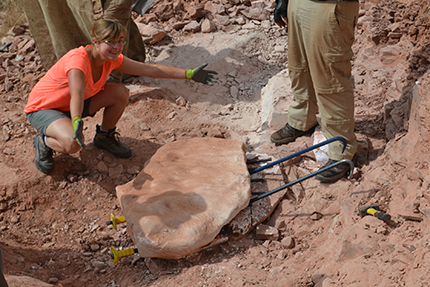 Kimi Chapelle, a PhD student at the Evolutionary Studies Institute at the University of the Witwatersrand in Johannesburg, South Africa (Wits), has used the Wits MicroFocus CT facility to peer inside the skull of the dinosaur Massospondylus.

Chapelle was able to use the CT facility to rebuild every bone of Massospondylus’s cranium, and to even look at tiny features like nerves exiting the brain and the balance organs of the inner ear. Her research is published today in the open-access journal, PeerJ.

Along with the paper, which is open for anybody to download and read, a 3D surface file of the skull is available to be downloaded.

“This means any researcher or member of the public can print their own Massospondylus skull at home,” says Chapelle.

Massospondylus is one of the most famous dinosaurs from South Africa and was named in 1854 by the celebrated anatomist Sir Richard Owen. Fossils of Massospondylus have been found in many places in South Africa, including Golden Gate National Park, where James Kitching discovered fossil eggs and embryos in 1976. Surprisingly, the skull of Massospondylus has never been the focus of an in-depth anatomical investigation. 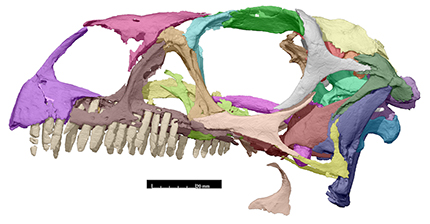 “I was amazed when I started digitally reconstructing Massospondylus’ skull, and found all these features that had never been described,” said Chapelle, “it just goes to show that researchers still have a lot to learn about South Africa’s dinosaurs.”

Some of the most interesting discoveries from the skull, which is described in Chapelle’s paper include:

“By comparing the inner ear to that of other dinosaurs, we can try and interpret things like how they held their heads and how they moved. You can actually see tiny replacement teeth in the bones of the jaws, showing us that Massospondylus continuously replaced its teeth, like crocodiles do, but unlike humans that can only do it once,” says Chapelle. 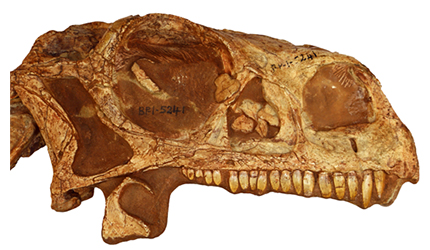 "Also, the fact that the bones of the braincase aren't fully fused means that this particular fossil is that of an individual that is not fully grown yet. This allows us to understand how Massospondylus grew, how fast it grew and how big it could grow.”

Hundreds of Massospondylus fossils have been found in South Africa, ranging in size from hatchlings to adult. Chapelle is using CT technology to study these additional fossils for her PhD. “I’ll be using scans of other specimens to answer new questions,” said Chapelle, “for example, how did Massospondylus babies weighing less than 100g grow up to be half-tonne adults?”.

“Students like Kimi have been able to use our CT facility to produce cutting-edge research like this” said Prof. Jonah Choiniere, the supervisor and co-author of the study, “and it’s changing the way we do dinosaur research.”