Creative management of grazing through the use small fires can draw back herbivores to grazing areas that are avoided by animals.

A recent paper by scientists from Wits University in South Africa shows how creative fire management can increase habitat for wildebeest and other grazing animals in national parks.

The work, published in the Journal of Applied Ecology (http://onlinelibrary.wiley.com/doi/10.1111/1365-2664.12956/full), shows that small, repeated fires can have a concentrating effect on animals, and create “grazing-lawn ecosystems” where food quality is higher and herbivores can see predators from further away.

The research was initiated through a collaboration between the University of the Witwatersrand and the South African National Parks (SANParks).  SANParks managers within Kruger National Park (South Africa’s largest protected area) have been managing fire since as early as 1957, with fires applied to achieve particular objectives.

However, recent self-analysis raised concerns that the fire-policy in the Kruger Park was resulting in a switch to fire-adapted grasses that excluded grazing animals who need higher quality graze such as wildebeest. Managers were specifically worried that large fires resulted in grazers spreading out into the large burn scars after a fire and reduced grazing pressure in the local area. 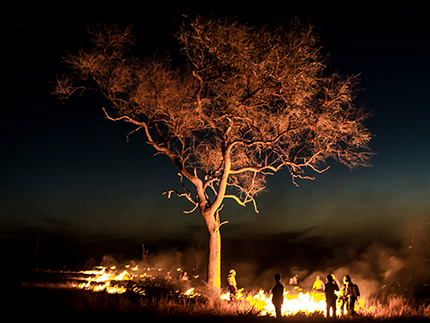 Navashni Govender from SANParks joined up with Prof. Sally Archibald from Wits University and Prof. Catherine Parr from the University of Liverpool. Together with a team of graduate students and technicians, and with the support of Working on Fire, Govender, Archibald and Parr set up a large-scale experiment near Satara Restcamp in the Kruger Park in 2013.

Over the following three years fires of varying sizes were lit annually in the early- and late-dry season of each year and the type and number of grazers visiting burns was monitored by looking for the presence of dung on burn sites. The response of grass to the grazing herds was also measured with plots that were never burnt used to compare any changes.

“After 5 years the results are conclusive,” says Archibald. “Our PhD student, Jason Donaldson, has shown that all grazers increase their use of small burns (<25ha) after a fire, and that the number of animals on these smaller burns is large enough to keep grass short and palatable for longer periods.”

Wildebeest remained on these small burns and actively selected them over areas where burns were absent, and grass was taller. The continued high number of wildebeest on small burn patches ultimately kept grass very short (

The collaborators are now investigating whether smaller animals, like grasshoppers, benefit from the management intervention, and have found three families that were unique to short-grazed patches, increasing biodiversity overall.

“The research adds to a growing understanding of the interactions between fire, grazers and grass structure and function in savannas and highlights the importance of understanding feedbacks between fire management policies and wild herbivores,” says Donaldson. “The collaborators have been testing this management tool in other ecosystems in Africa, and are also, with collaborators from the University of Pretoria, exploring what this means for rangeland systems, where, cattle, not wildebeest are the dominant grazers.” 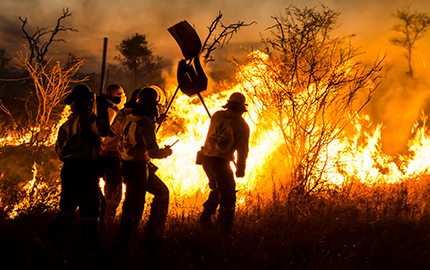 Fire management may seem like a contradictory idea to some, who view it as a destructive force of nature, but humans have been making use of effect of fire on vegetation structure and animal movement since before the rise of modern man.

“In his book Sapiens, Yuval Noah Harari states: ‘Some human species may have made occasional use of fire as early as 800 000 years ago … A carefully managed fire could turn impassable barren thickets into prime grasslands teeming with game’,” says Donaldson.

“The research presented here adds a new layer to this story, as fire size has seldom been considered in these management decisions,” says Archibald.

The Kruger National Park is exploring the possibility of using this new insight to manage the southern Basalt plains, which are notoriously low in animals despite their high soil fertility.

Archibald teamed up with visual artist Hannelie Coetzee to interpret this work through burning an artwork titled Locust and Grasshopper (2017) in a Highveld savannah landscape. Coetzee created the images of a locust and grasshopper facing each other, and used the savannah landscape as her canvas to plot them in, with 5D Surveys. With the assistance of fire management organization Working on Fire, they performed their work in a live-burn demonstration at the Nirox Sculpture Park in the Cradle of Humankind.

Through her art, Coetzee asks the question of how human behaviour impacts on our environment.

“Science and art are often conflicting schools of thought, but they can work in parallel, providing a meeting of the head and heart,” says Coetzee.

“The representation of the locust and grasshopper expands on the ideas of diversity, but also emphasizes the idea that something so small can play such a large role in our environment. It is only when we look at the intricate detail of these elements that we can communicate these complex issues to the public in a visual way.”