For the first time in history, Wits researchers have witnessed electromagnetic signals that are associated with the gravitational wave emission from the coalescence of two massive neutron stars. 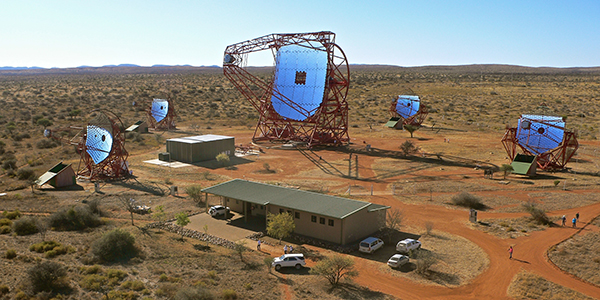 Working with data from the High Energy Spectroscopic System (H.E.S.S) telescope in Namibia, as well as with data from the AGILE Italian satellite, Professor Sergio Colafrancesco and his Team from the School of Physics at the University of the Witwatersrand, complemented a large variety of electromagnetic (e.m.) observations that were able to record signals from the same neutron star merger event.

These e.m. signals range from the detection of a gamma-ray burst about 2 seconds after the gravitational wave event detected by Ligo-Virgo, over near-infrared, optical and UV emission from decay of radioactive nuclei created in the resulting kilonova, to X-ray and radio emissions detected several days and weeks after the event. This first and extremely successful observation campaign is marking the beginning of truly Multi-Messenger Astrophysics.

The collision of the stars was such a massive event, that it emitted in gravitational waves the energy equal to three solar masses (three times the mass of the Sun), that was picked up by both the Ligo and Virgo Gravitational Wave interferometers. This event was announced at an international media conference in Washington DC today (Monday, 16 October, 4pm SA time).

While the H.E.S.S telescope was trained on the event, it followed up a gamma ray burst in the same part of the sky, which exploded only two seconds after the merging of the two neutron stars.

“This is the first time ever that an astronomical event such as a gamma ray burst, and other relative electromagnetic signals, was observed alongside an event large enough to emit gravitational waves,” says Colafrancesco.

Gamma ray burst are explosions in distant galaxies that release extremely high amounts of energy. They are the brightest electromagnetic events known to occur in the universe, and are very rare, with only a few occurring in a galaxy every million years.

“It was previously believed that gamma ray bursts might occur when a high mass star collapses to form a neutron star or a black hole, or during the merger of two binary neutron stars – as in this case – but now, for the first time, we have the actual evidence for it,” says Colafrancesco.

Gravitational waves are only emitted by as massive objects in the universe interact with each other, such as black holes or neutron stars that merge.

The collision and merging of the two neutron stars was observed (by Ligo in Hanford, Washington in the USA, and in Livingston, Louisiana in the USA, and by Virgo, in Cascina, Italy) on 14 August 2017. The observation was named GW170817.

A neutron star is a very compact star, that is not as compact as a black hole, but their merger might result in a black hole.

This energy was picked up by the three advanced gravitational wave laser interferometers, located thousands of kilometres away from each other when the passage of the gravitational wave provides an oscillation of the lengths of their two arms, at the same frequency of the incoming gravitational wave. This displacement effect is very tiny: as an example, the gravitational wave generated by the merging of two neutron stars in a galaxy close to ours will stretch the distance Earth-Sun (150 million of km) by the size of an atom.

“This is the start of new Multi-Messenger Astronomy, where various techniques such as the gravitational wave laser interferometers – which is a displacement measuring tool – and astronomical techniques such as telescopes sensitive to e.m. radiation are used together to study one single event,” says Colafrancesco. “Especially when the event is so big that it emits gravitational waves.”

Scientists from over 70 observatories involved in the observation gathered large amounts of valuable data from the event, including learning what the source of the gravitational waves was. They also learned how an event that emits gravitational waves relates to other kinds of radiation, such as gamma rays, infrared radiation and radio waves, emitted from space.

“We now know for certain that an event associated with gravitational waves is related to the emission of electromagnetic radiation, as in a gamma ray burst,” says Colafrancesco.