Habitat destruction and poaching is threatening the Sungazer

Novel genetic techniques might be used to understand the effects of habitat transformation as well as to combat illegal trade of the animals. 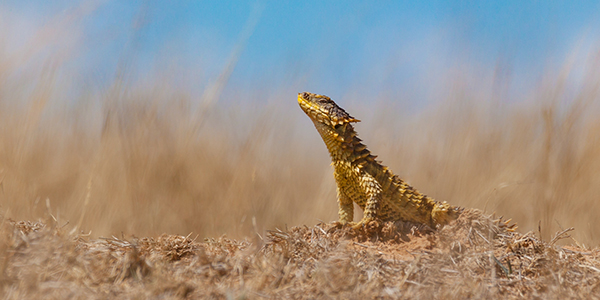 The Sungazer (Smaug giganteus), a dragon-like lizard species endemic to the Highveld regions of South Africa, is facing an assault on two fronts as farming and industrialisation encroaches on its natural habitat – which already consist of only a several hundred square kilometres globally – while the illegal global pet trade is adding pressure on pushing the species into extinction.

The Sungazer lizard is listed on CITES Appendix II, which means only the “grandchildren” of wild animals (captive bred animals), may be traded, these animals have been traded in Europe since the 1800s. Since then, only one instance has been recorded of an animal successfully being bred in captivity, yet, to this day, animals are being traded on a regular basis. Sungazers can sell for thousands of dollars each internationally, with the main markets being Japan, Germany, and the USA. If caught in the possession of a Sungazer without the correct permits in South Africa, guilty parties can face up to 20 years in prison or a R5 million (South African Rand/ZAR) fine.

Shivan Parusnath, currently a PhD student at Wits University, conducted a conservation assessment of the species for his Masters research. He found that the species’ population has declined more than one/third over the last decade, and that just under half of the species’ habitat has been irreversibly transformed by humans – primarily for crop production.

Unlike the most other members of the cordylid family which live in rocky crevices, the Sungazer is a grassland specialist and lives in self-excavated burrows.

The Sungazer’s natural distribution area is restricted to only parts of the Free State and Mpumalanga provinces of South Africa. They only inhabit flat and gently sloping Themeda triandra dominated primary grassland. Like other habitat specialists, Sungazers appear to be restricted to this area not only because of physical barriers such as large rivers and mountains, but also because of the unique climactic niche in this region. The soil type, prey species, and temperature and humidity are all important determinants in where we can expect to find Sungazers. 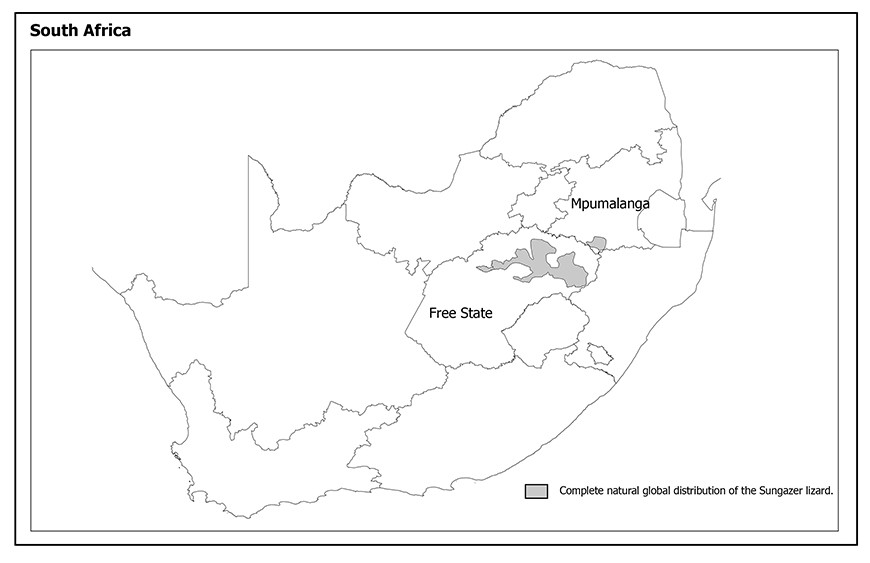 “The rich and arable Highveld grasslands that the Sungazers inhabit is, unfortunately for the species, also the perfect soil for crop production. This leaves the species prone to danger when humans plough the land for crops,” says Parusnath.

Because of their specific climactic niche, it is also virtually impossible to breed Sungazers in captivity. “Unlike habitat generalists that can expand their distribution because they do not have very specific habitat requirements, Sungazers likely do not even enter the process of producing sperm and eggs without the correct cooling and warming periods that they experience seasonally in the wild,” says Parusnath. “On top of that, Sungazers seem to have a very complex social structure, and so keeping them in random combinations in a 1 metre long glass tank is not going to be very productive in terms of getting them to reproduce.”

Over the last decade about 80 Sungazers have been experted from South Africa with permits on an annual basis, even though it is highly unlikely that they were captive bred animals, says Parusnath.

“These are just the animals we know about, and the real number leaving the country annually might be much higher. There was recently a case of a suitcase from SA being intercepted in Schiphol airport in Amsterdam – and this containing about 15 live Sungazers.

Parusnath, is currently using novel genetic techniques to understand the effects of habitat transformation on the population structure of the Sungazer. Funded by the National Zoological Gardens of South Africa, Rufford’s Small Grants for Nature, and the National Geographic Society, Parusnath is developing and testing microsatellite markers similar to those used in human parentage tests to establish the genetic relatedness of Sungazers in different populations across the species’ distribution.

These markers can also be used to conduct parentage analysis on Sungazers in order to either verify or nullify claims that animals for sale in the pet trade were bred in captivity before trading permits are granted.

“This will make a huge difference to the illegal trade in the species, since there are strong suspicions that wild-caught Sungazers have been laundered and sold as captive-bred with permits for decades,” says Parusnath. “This study can also serve as an example of how laundering of wild-caught animals can be stopped, as Sungazers are not the only species falling victim to this loophole in the pet trade.”