International scientists share knowledge with SA students and industry at a workshop, dedicated to the CERN electronics upgrade.

South African students and industry are benefiting from the major digital electronics challenge of upgrading the ATLAS Tile Calorimeter at the Large Hadron Collider (LHC) at CERN.

The Tile Calorimeter of the ATLAS detector covers the central region of the detector and it is designed to measure the energy and position of particles that result from high-energy proton-proton collisions provided by the LHC. The Tile Calorimeter detects particles called hadrons, which are copiously produced in high-energy proton-proton collisions. 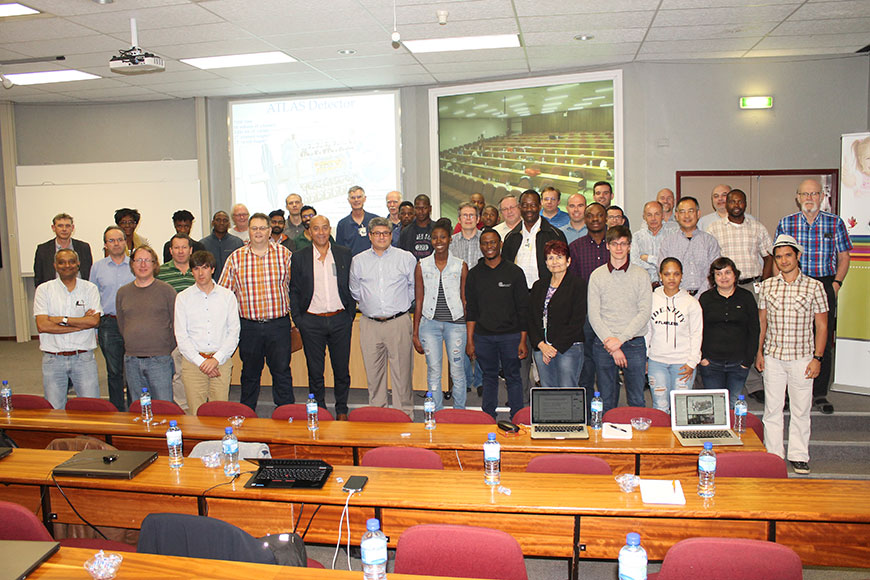 Following the discovery of the Higgs boson in 2012, the LHC is developing a long-term plan to increase the intensity of the collisions. This is necessary to provide a lot more data with which to explore the Higgs boson and its coupling to other particles; the search for other bosons and other new particles. In 2016 the LHC delivered collisions with an intensity significantly surpassing the initial design. The LHC envisions major upgrades in the future that will increase the data available by about 100 times.

“The Tile Calorimeter will undergo a major replacement of its on- and off-detector electronics for the high luminosity programme of the LHC starting in 2026,” says Professor Bruce Mellado, who coordinates of the contribution to ATLAS by South Africa.

All signals will be digitised and then transferred to the off-detector electronics, where the signals will be reconstructed, buffered, and sent to the first level of the trigger at a rate of 40 MHz, or 40 million times every second. This will provide a better precision of the calorimeter signals used by the trigger system; will provide more information and will allow the development of more complex trigger algorithms.

Mellado and colleagues from the US and Europe organized the ATLAS Tile Calorimeter Upgrade week at iThemba Laboratories in Cape Town from March 15th to 17th, where scientists from around the world, working at the ATLAS experiment at CERN gathered to discuss the technicalities of the upgrade.

Sponsored by the Department of Science and Technology and the National Research Foundation, the event provided a unique opportunity for local students and industry to gain information and knowledge from highly respected scientists from around the world.

“The ATLAS upgrade represents a major challenge in digital electronics that South African scientists and industry are profiting from,” says Mellado. “The generation and real-time processing of digital signals forms the first stage of what is usually referred to as the Big Data problem. In the process of pursuing this type of complex problems, South African students encounter the opportunity to acquire unique skills, which are brought to the country.”

Local industry also profits from these activities. Based on a design developed for the upgrade of the off-detector electronics of the Tile Calorimeter, South African industry was able to manufacture in 2016 the most complex electronics board in the country to date.

The production of the board was possible thanks to a concerted effort in investing and innovating that now enables local industry to produce complex boards more efficiently and affordably.

The workshop was kicked off with an open session chaired by Mellado. The first speaker was the Director of iThemba Laboratories, Dr. Faiҫal Azaiez, who welcomed the participants and gave an overview of his vision for the laboratory and its international projection. The Director emphasized the commitment to support the development of instrumentation for South Africa. Daniel Dock, Managing Director, TraX Interconnect (Pty) Ltd, gave a presentation on the history and capabilities of the South African electronics industry. Dock gave an overview of the complexities behind the manufacturing of high-density electronics board, with emphasis on the techniques that had to be developed to manufacture the board for the ATLAS Tile Calorimeter.

The open session was concluded by a colloquium by Dr. Oleg Solovyanov, the Project Leader of the ATLAS Tile Calorimeter. Solovyanov reviewed the most important features of the detector and plans for the upgrade.