New laboratory will work closely with the University of Johannesburg to offer southern African scientists a local solution for isotope analysis.

Earth science research on the African continent just made a massive leapfrog into a new era with the launch of the state-of-the-art, ultra-clean Wits Isotope Geoscience Laboratory, known as the WIGL.

This laboratory, based in the School of Geosciences at Wits, offers scientists from a wide range of disciplines such as ecology, palaeontology, medicine and, of course, geosciences the opportunity to perform ultra-clean, contamination-free experiments that separate isotopes from Earth materials. “Isotopes, elements with variable numbers of neutrons, are incredibly powerful tools used to trace processes operating on the Earth,” says Dr Grant Bybee of the Wits School of Geosciences and Director of the WIGL. “Instead of shipping our samples to Europe at a huge cost in terms of time, money and resources, scientists in southern Africa will have a world-class facility on their doorstep.” 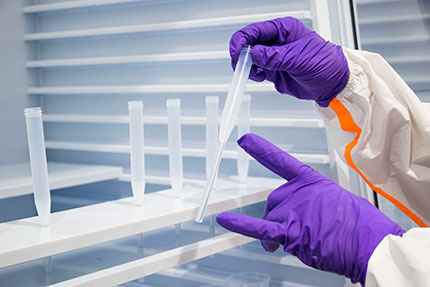 The elements and isotopes that this laboratory aims to separate are normally present in extremely low abundance in rocks, meteorites, fossils and water. “Elements like Pb, Sr, Cu, Zn are normally only present at the part per million or part per billion level in these materials and so it is crucial that we process these samples in an extremely clean and contamination-free environment,” says Bybee. “If not, researchers run the risk of contaminating precious samples with elements from the surroundings, obscuring the natural isotope signal of the samples.”

Normal air contains over 1 million particles cubic foot, but the complex air filtration system in WIGL, reduces this by about a million times to 1-10 particles per cubic foot. Along with a completely metal-free environment – everything in the lab is constructed of durable, acid-resistant, plastic – this air quality ensures that any sensitive samples processed in the WIGL remain contamination-free. “It would be an excellent place to work for those that suffer from allergies!” says Bybee. As you progress further into the laboratory, the environment gets cleaner and cleaner, ensuring that most sensitive chemical techniques aren’t jeopardised.

The laboratory took over a year to build, using high-tech components. Due to the sensitive nature of the laboratory, every single part had to be built from non-metallic material, and any unavoidable metal parts have to be carefully covered with plastic coating. In total, the WIGL cost just over R6 million to build, and was funded by Wits University.

The WIGL is made up of four separately sealed rooms, where the air quality and flow is carefully controlled. A working sample, like a crushed rock, would enter through the first room, where it would be weighed on an incredibly precise scale. It would then pass through a secure air-controlled hatch, where, in the second room, it would be dissolved in strong acid like hydrochloric acid and prepared for analysis in the third and fourth rooms. Special resins and chemical techniques allow the researchers to separate the elements of interest. Once this is completed, samples would be sent to an ultra-precise mass spectrometer at the Department of Geology at the University of Johannesburg, where the exact amount of each isotope would be measured. “The two labs at Wits and UJ have developed an incredibly strong collaboration aimed at advancing our understanding of Earth processes using high-quality isotope measurements,” says Bybee. 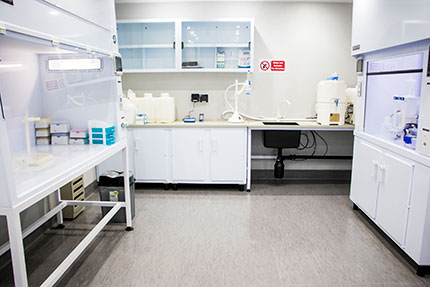 The use of elemental and isotopic analysis is extremely important in geosciences, where scientists study the composition, age and processes operating on the Earth. However, isotopes are also highly effective in other scientific fields such as medicine – for example in the diagnosis of cancer and bone diseases – and in palaeosciences for establishing the origin, movement patterns and diets of now extinct animals, including our human ancestors.

The WIGL builds on a strong a history of pioneering isotopic work at Wits University in which many ground-breaking techniques and ideas were generated. “This is a first for the geoscience community in South Africa and the WIGL team is geared up to facilitate and inspire the next generation of scientists to produce important, interdisciplinary science,” says Bybee.