Researchers use “Fitbits” to track elephant sleep in the wild. 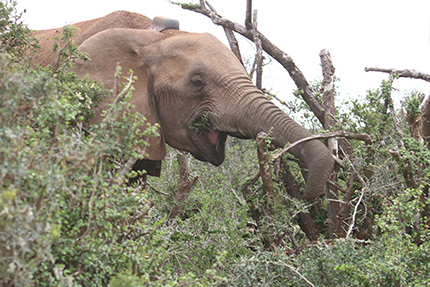 Although being asleep precludes these other activities, all animals do sleep. Some, like whales, dolphins, seals and certain birds, do it in a very unusual manner, sleeping with only half their brain at a time, while some sleep quite a lot and others less so.

“While there are many hypotheses regarding the function of sleep, the ultimate purpose of sleep is yet to be discovered,” says Prof. Paul Manger, from the School of Anatomical Sciences at Wits University.

The lack of sleep can – even over a relatively short term – lead to brain damage, and in the longer term death, as can be seen in the human conditions fatal familial insomnia and sporadic fatal insomnia.

Generally, larger animals tend to sleep less than smaller animals, but do elephants fit this trend?

Behavioural studies of elephant sleep in zoos record that they sleep around four hours per day and can sleep standing up or lying down – but how much do they sleep and how do they sleep in their natural environment?

Working in the Chobe national Park in Botswana, Manger, Dr Nadine Gravett and Dr Adhil Bhagwandin at the University of the Witwatersrand, along with their colleagues from the NGO Elephants Without Borders, Botswana, and the University of California, Los Angeles, made use of small activity data loggers, scientific versions of the well-known consumer fitness and wellness tracker, Fitbit, to study the sleeping patterns of elephants in the wild.

“We reasoned that measuring the activity of the trunk, the most mobile and active appendage of the elephant, would be crucial, making the reasonable assumption that if the trunk is still for five minutes or more, the elephant is likely to be asleep,” says Manger.

The team outfitted two matriarch elephants, noting when they used their trunk by an implanted activity data logger when they moved around and – by installing a GPS collar with a gyroscope around their necks – where and when they were lying down to sleep.

The main finding of the study, recently published in the journal PLOS ONE, was that the two matriarch elephants slept only two hours per day on average, and this sleep occurred mostly in the early hours of the morning, well before dawn.

“The data also indicates that environmental conditions (temperature and humidity, but not sunlight) are related to when the elephants fell asleep and when they woke up (which happens well before dawn),” says Manger. “This finding is the first that indicates that sleep in wild animals is likely not to be related to sunrise and sunset, but that other environmental factors are more crucial to the timing of sleep.” 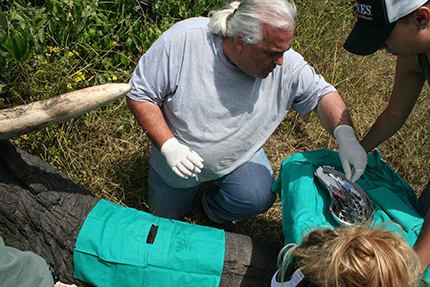 The team also found that the wild elephants could sleep while standing up, or while lying down. Lying down to sleep only happened every three or four days and for about an hour, and it is likely that when the elephants were lying to sleep were the only times they could go into REM, or dreaming, sleep, meaning elephants possibly don’t dream on a daily basis like we do, but may dream only every few days.

“REM sleep (or dreaming) is thought to be important for consolidating memories, but our findings are not consistent with this hypothesis of the function of REM sleep, as the elephant has well-documented long-term memories, but does not need REM sleep every day to form these memories,” says Manger.

Lastly, they found that the two elephants, when disturbed by such things as predators, poachers, or a bull elephant in musth, could go without sleep for up to 48 hours, and following the start of the disturbance would walk up to 30 km from where the disturbance occurred. This put a great deal of distance between the elephant herd and any source of danger, but at the expense of a loss of a night’s sleep.

“Understanding how different animals sleep is important for two reasons. First, it helps us to understand the animals themselves and discover new information that may aid the development of better management and conservation strategies, and, second, knowing how different animals sleep and why they do so in their own particular way, helps us to understand how humans sleep, why we do, and how we might get a better night’s sleep.”