Discovery allows scientists to connect the last major vertebrate group to the tree of life.

High-definition CT scans of the fossilized skull of a 280 million-year-old fish reveal the origin of chimaeras, a group of cartilaginous fish related to sharks. Analysis of the brain case of Dwykaselachus oosthuizeni, a shark-like fossil from South Africa, shows telltale structures of the brain, major cranial nerves, nostrils and inner ear belonging to modern-day chimaeras.

This discovery, published early online in Nature on Jan. 4, allows scientists to firmly anchor chimaeroids — the last major surviving vertebrate group to be properly situated on the tree of life — in evolutionary history, and sheds light on the early development of these fish as they diverged from their deep, shared ancestry with sharks.

The paper was co-authored by Dr Rob Gess, a partner of the South African Centre of Excellence (CoE) in Palaeosciences, who is based at the Albany Museum in Grahamstown. The CoE is hosted at Wits University as part of the Evolutionary Studies Institute. 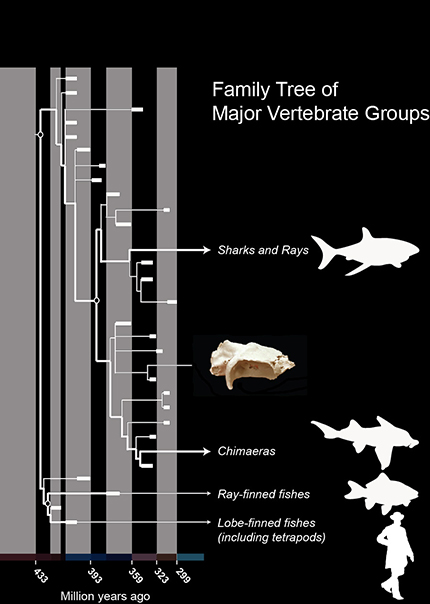 “The origin of holocephalan fish (chimaeras) has long puzzled scientists, who had worked out the evolutionary relationships of all other major living vertebrate groups. Chimaeras were clearly somehow related to sharks and rays but they are very different, with a very distinctive skull. All fossil chimaeras were already completely chimaera so there were no recognised in-between forms to bridge the gap between their ancestors and the ancestors of modern sharks,” says Gess.

“Our research demonstrates that Dwykaselachus provides the missing piece of the puzzle, as it has features of certain primitive ‘sharks’ as well as of chimaeras. We can now anchor chimaeras firmly on the tree of vertebrate life.”

There are about 50 living species of chimaeras, known in South Africa as the Josef, St. Joseph sharks or elephant sharks. They represent one of four fundamental divisions of modern vertebrate biodiversity and are actually very different from sharks – with large eyes and tooth plates, adapted for grinding prey. St Joseph sharks generally live very deep in the ocean, but come into shallower waters to breed in summer. As a result they are often caught in summer as bicatch and are also sometimes deliberately netted on the west coast of the Western Cape. Their meat is however rather oily and they are not a popular dish.

“Sharks and chimaeras both have skeletons of cartilage, so, other than teeth and fin support spines, fossils of both groups are very rare. None of these had previously shown a combination of characters of both groups,” says Gess.

The Dwykaselachus fossil resolves this issue. It was originally discovered by amateur paleontologist and farmer Roy Oosthuizen in the 1980s. Oosthuizen discovered the fossil on his farm, Zwartskraal in the Prince Albert district, while he was out in the veld with his son. He found the nodule of rock that had weathered out of 280 million year old mudstone, just 30 centimetres above the top of the Dwyka glacial deposits. 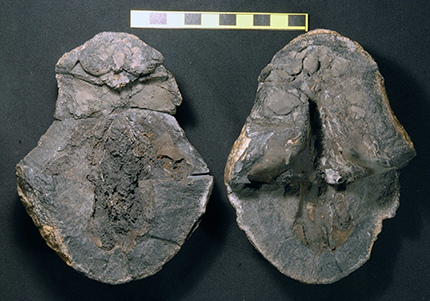 Thinking that it might contain a fossil, he asked his son to hold it edge on whilst he hit it with a hammer. It split into 3 pieces, revealing parts of the fossil skull. It was named by palaeontologist Burger Oelofsen in the eighties. The fossil cartilage is however very thin and couldn’t be excavated out of the rock, so he could only describe what was visible on the broken surfaces of the nodule. The most important features of the fossil weren’t accessible at the time. After that it was archived in a small cardboard box in the strongroom reserved for type specimens at the South African Museum in Cape Town.

There it remained until 2013 when Wits’ Evolutionary Studies Institute obtained a micro-CT scanner. “At the time I was a South African CoE in Palaeosciences partner at Rhodes University Geology Department,” recalls Gess. “I immediately requested permission to try scanning some early shark fossils. Initially my main focus was some mid Devonian (420 – 360 million year old) specimens from the Klein Karoo, however, lead author of the study, Dr Mike Coates, suggested that I should include Early Permian  Dwykaselachus in my study. I obtained permission from Iziko Museums to loan it from the South African Museum in Cape. From there I took it up to Wits and we spent days getting the best possible scans. It scanned incredibly well, so our team were able to create a perfect 3D digital image of the skull, inside and out.” 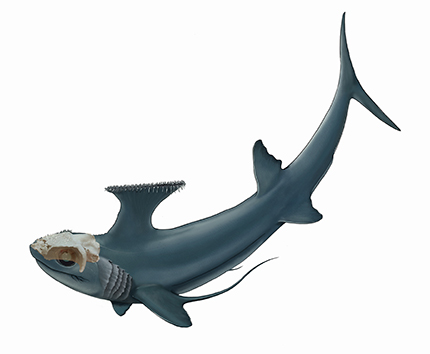 At the surface, Dwykaselachus appeared to be a symmoriid shark, a bizarre group of 300+ million-year-old sharks, known for their unusual dorsal fin spines, some resembling boom-like prongs and others surreal ironing boards.

CT scans showed that the Dwykaselachus skull was remarkably intact, one of very few early cartilaginous skulls that had not been crushed during fossilization. The scans also provide an unprecedented view of the interior of the brain case.

“When I saw it for the first time, I was stunned. The specimen is remarkable,” says Coates, Professor of Organismal Biology and Anatomy at the University of Chicago.

The scans show a series of telltale anatomical structures that mark the specimen as an early chimaera, not a shark. The braincase preserves details about the brain shape, the paths of major cranial nerves and the anatomy of the inner ear, all of which indicate that Dwyka belongs to modern-day chimaeras. The scans reveal clues about how these fish began to diverge from their common ancestry with sharks.