Who made the art?

Researchers find a way to accurately identify the sex of the artists who created ancient rock art.

Prehistoric human ancestors that created hand stencils in caves 40,000 years ago can now be identified as male or female with more than 90% accuracy.

Ancient hand stencils were made by blowing, spitting or stippling pigment onto a hand while it was held against a rock surface, leaving a negative impression on the rock in the shape of the hand. Hand stencils are frequency found alongside pictorial cave art created during a period known as the Upper Palaeolithic. Stencils found in Sulawesi, Indonesia date back 40,000 years, and those discovered in Europe are estimated to be as old as 37,000 years old. 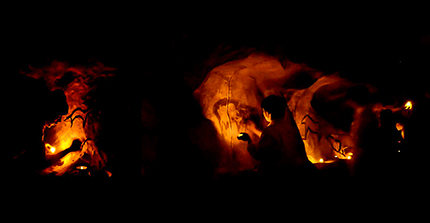 This study, published today (open‐access) in the Journal of Archaeological Science, utilised techniques used in modern forensics to analyse stencils created by student volunteers and researchers as part of a collaborative research project between anthropologists and archaeologists at the University of Liverpool, the University of Central Lancashire (UCLan) and the University of the Witwatersrand (Wits) in South Africa.

University of Liverpool biological anthropologist, Dr Emma Nelson, led the study. She said: “Archaeologists are interested in hand stencils because they provide a direct, physical connection with an artist living more than 35,000 years ago”.

“Now, using a new experimental application, results from our study indicate it is possible to determine, with more than 90% accuracy, the sex of someone who lived tens of thousands of years ago, from the shape and size of their hand outline. We have even applied the method to hand stencils where digits are missing – common in Palaeolithic art – something prior studies have not been able to do.”

Previously, researchers focused on hand size and finger length, often producing conflicting results. Here, a technique called geometric morphometrics was used to detect sex‐based differences in hand shape and form. Known‐sex hand stencils were digitised and a series of 2D landmarks were applied to statistically evaluate the true shape and relative size of each stencil. 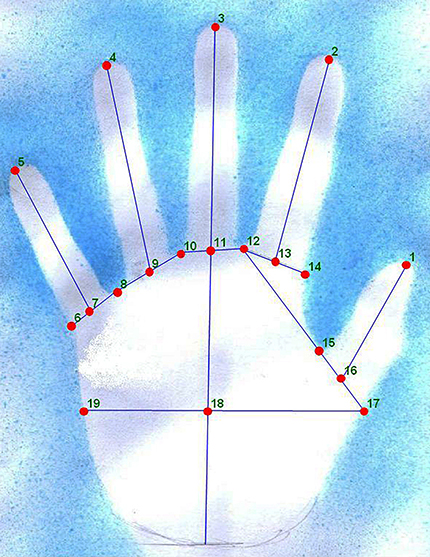 Dr Patrick Randolph‐Quinney, a forensic anthropologist at UCLAN and Wits University, said: “The problem with focussing on hand size and finger length is that two different shaped hands can have identical linear dimensions and ratios. To capture shape, we applied geometric morphometrics, a technique that had never been tested on hand stencils.”

Randolph-Quinney says this geometric approach is very powerful as it allows researchers to look at the palm and fingers independently. “It revealed that the shape of the palm is actually most indicative of the sex of the individual, rather than the finger size or length.”

Jason Hall, an archaeologist, also a member of the team from the University of Liverpool added: “As part of this study we built a replica cave wall to allow us to experiment with how art was made, and how it might look under different lighting conditions – without having to go deep underground. This ‘portable cave’ has been really popular with the public, especially school groups, who can make art in the same way that our ancestors did”.

Project co‐ordinator, Dr Anthony Sinclair, a Reader in Archaeology at the University of Liverpool and an expert in Palaeolithic archaeology said: “This is a great example of how archaeological science and forensic science are working together to advance our understanding of the past, and the social and cognitive systems that evolved during the Upper Palaeolithic”.

“We would encourage other researchers to apply this method to different human populations so we can build a more global understanding of hand variation.”

The full report, Beyond size: The potential of a geometric morphometric analysis of shape and form for the assessment of sex in hand stencils in rock art, appears in the Journal of Archaeological Science.