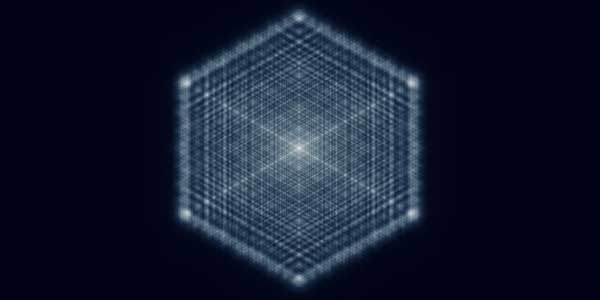 We all appreciate the beauty of Nature, whether it be cloud patterns, mountain ranges or coastlines. These structures have complex shapes that at first appearance are hard to quantify: how could we describe them in a “scientific manner”?

Some decades ago the idea arose that very complex structures could be produced by very simple iterative rules: that is, a simple rule repeated over and over may explain much of Nature’s complexity, revealing its hidden symmetries in the process.

Computers are ideal for simulating such tasks – repetition is their forte. Using computers, mathematicians began to produce beautiful abstract creations. Today we know these as fractals.

Nature uses this iterative process – a simple starting shape and a simple repeating rule – to create many of the complex structures we see around us, from ferns to sea shells.

So, nature can produce fractals; computers can, too. Could light be a fractal? The answer was known to be yes. If light was passed through a fractal-like object then it too became fractal. Then, about two decades ago, scientists predicted that simple lasers may also be able to produce fractals.

Now that prediction has been fulfilled. I lead a group at the University of the Witwatersrand in South Africa that works on structured light, including lasers. Working with colleagues at the country’s Council for Scientific and Industrial Research and in Scotland, we have made the first direct observation of fractal light from lasers.

This is exciting for two reasons. First, there’s a certain satisfaction in unravelling mysteries in science, advancing our knowledge. Second, such discoveries often lead to new technologies. Our group’s research aim is to create custom lasers with the ability to output any desired pattern. Doing so will see lasers find even more applications than they do today. Fractals have already been used in digital processing, imaging and even medicine. So we are excited about the possibility to offer a laser to deliver such exotically structured light.

But mirrors are highly polished surfaces with no evident structure, suggesting a rather bland output. Indeed, this is what we mostly see: blobs of light from our laser pointers, for example. So it was somewhat perplexing to think that this “box” could produce a complex light field that is fractal.

We looked carefully at the prediction from 20 years ago and released that to see the fractal you would have to actually look inside the box. That’s because paradoxically, the light that comes out of the box would not be fractal. The trick was to design the optical system to see inside the laser – and in particular to see a very specific place, the common imaging plane.

The mirrors have such a plane because they are curved, like parabolic satellite dishes, and as with those dishes which focus to the detector, so the curved mirrors focus to a plane. Since the two mirrors face each other it is possible to adjust their separation so that where they focus coincides: the common imaging plane.

To understand why, imagine that the light begins at this plane and travels from left to right, bounces off the mirror, goes all the way back to the other mirror, bounces off, and then returns to the starting plane. At the imaging plane the returning light is a magnified version of the initial light. This keeps happening, and the light becomes either smaller or bigger after each return trip.

All the images we have seen so far are 2D: they are images on a screen rather than 3D objects that would look like a hologram.

This means that while the mystery of 2D fractals in lasers is now resolved, there is a new prediction to test. In our simulations of the laser we found that there might be fractal structure along the axis of the box, in the direction that the light is travelling in. This would imply that 3D fractals are possible in lasers.

To verify this would require a far more precise experiment, the subject of ongoing research in our group.

This is the nature of science: answering old questions inevitably results in new, more complex questions to be answered. So, although one chapter is closed, another remains completely unwritten.

Andrew Forbes, Professor, University of the Witwatersrand. This article is republished from The Conversation under a Creative Commons license. Read the original article.