"We can improve the quality of life if we focus on what works – education, strong institutions, robust legal, social and fiscal systems." - Piketty

Arguably the world’s most prominent economist on inequality, Professor Thomas Piketty, opened the Wits School of Economics and Finance’s (SEF’s) virtual centenary event, presenting critical ideas for understanding the complexity of global inequality, and solutions for meaningful and lasting economic and social change. 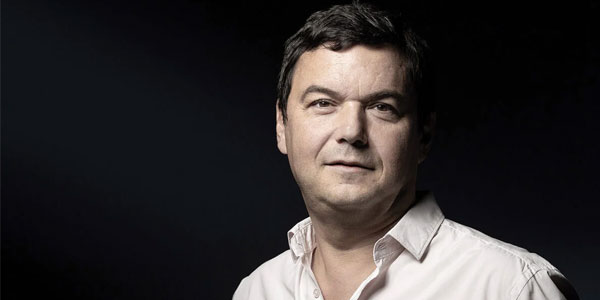 Noting that the theme of Wits 100th birthday is inequality, Pro Vice-Chancellor for Climate, Sustainability and Inequality, Professor Imraan Valodia welcomed Piketty as the keynote speaker, particularly because Piketty has likely done more to reveal the nature of inequality than any other person.

The French-born Piketty’s latest book, A Brief History of Equality, presents a short, sweeping and optimistic history of human progress toward equality. The book dives deeply into capitalism, colonialism, slavery, and the welfare state and their implications for inequality. But the seemingly intractable nature of inequality, notably in countries like South Africa, is not (as history has shown) insurmountable. “We can improve the quality of life for billions of people if we focus on what works – education, strong institutions, robust legal, social and fiscal systems – to make global equality a reality,” said Piketty.

Piketty advises against further nationalism and tribalism in the face of one of humanity’s greatest challenges, and suggests reparations (of rich countries to previous colonies), progressive taxation, and greater distribution of wealth. In his book, he focuses on participatory socialism, which requires “power sharing” and greater voting rights held by employees.

Piketty also supports the potential for a progressive wealth tax and a universal basic income grant in South Africa. However, he notes that the push for redistribution of income (via income taxes and grants) has received more attention than the redistribution of wealth (inheritance and assets), which is a major source of inequality. Options to address wealth inequality include land reform and a ‘minimum inheritance’ for all people at age 25 financed by a progressive wealth and inheritance tax. This would allow young people to avoid accumulating overwhelming debt and to and improve bargaining power for workers.

“The richest 10% own 60-80% of the world’s wealth and the bottom poor own less than 5%. This could change with the inclusion of a universal basic income,” he noted.

Piketty further argued that a reduction in emissions will have to come with a reduction in economic inequality. “We cannot expect the poorest 50% who contribute a fraction of greenhouse gas emissions compared to the richest 10% to pay the price of decarbonisation. He suggested a progressive carbon tax as a policy tool to tackle this issue.

Acknowledging the international scale of inequality, Piketty proposes a transformation of the international tax system such that a minimum tax is levied upon multinational corporations in tax havens; this money is then redistributed to countries in the global South. Piketty argued that “every country in the world should receive a share of tax revenues coming from the most prosperous and powerful economic actors in the world, including multinational corporations and global billionaires, in proportion to the population of each country”.

“We must remember that we’re in this together. All people should have the ability to feel in control and have agency over their lives,” he said.

Trade as an instrument for inclusion

Okonjo-Iweala, who is the first woman, and first African to lead the World Trade Organisation, explained that trade should be an instrument of inclusion, and a powerful way of changing Africa’s fortune would be to double its share of global trade. “The African Continental Free Trade Agreement, for instance, would create a powerhouse continental market for goods and services, boosting investment and innovation.”

Professor Posel noted that currently, Africa contributes only a tiny share (about 3%) to global trade. In addition, the continent’s exports mainly raw materials which are then manufactured elsewhere. An example is the exporting of raw shea butter from Africa, with value then added off the continent. This has been an ongoing concern and further concentrates wealth in developed economies.

All panellists agreed that there is a trust deficit in South Africa in large part owing to systemic corruption and ‘state capture’. “We have lost so much to corruption”, said Okonjo-Iweala, “and so we have to go back to the drawing board about how to fight it.”

She noted the importance of institutional transparency, particularly in procurement processes.

“Importantly, we need two things: technology and prosecution. This is what defeats corruption. We need to have strong legal systems to prosecute individuals and entities, and robust technology to strengthen our systems overall,” she said.

Makhaya said that trust can be achieved incrementally, and that the private sector has a responsibility to acknowledge its culpability.

Looking forward, Makhaya spoke about the importance of boosting small businesses in South Africa, while Professor Mncube noted that anti-competitive market behaviour undermines growth and investment. In South Africa, investment to boost trade, employment and, growth are at an historic low, said Creamer. “The government must therefore double its investment. So should the private sector,” he said.