In amending South Africa’s 40-year-old copyright law, reform has to be broad, innovative and adaptive.

Approved by Parliament and awaiting the President’s signature to be signed into law is a draft bill that divides the room, raises suspicion of who benefits and who loses, but holds the promise of finally transforming out-dated legislation.

The Copyright Amendment Bill was the subject of a seminar held at Wits on 7 August 2019. Titled Decolonising Copyright – Building our Creative and Information Economy it was hosted by the Wits Institute for Social and Economic Research (WiSER), Wits Libraries and ReCreate, an organisation of South African creatives who support the bill. ReCreate argues that the bill is long overdue to expand creators’ ability to create, to own and to earn from their work. They say the legislation can change the exploitative status quo that makes commissioners and funders of works the default owners of works created.

The draft bill is supported by, among others, SADTU and Blind SA, who were also represented at the seminar. Denise Nicholson, Scholarly Communication Librarian at Wits, who was also in attendance, says she welcomes the Copyright Amendment Bill as the current copyright law is outdated.

"It also has no provisions for people with disabilities, and as a result, it is in breach of our Constitution and international conventions on human rights and disabilities. The Copyright Amendment Bill is therefore welcomed as it is drafted within the framework of international, regional and local treaties, policies, the EIFL model copyright law, other progressive copyright regimes, and various research reports," she said. She added that the bill will enable access to information and will "support a culture of reading and innovation."

Those in opposition to aspects of the bill include collection management organisations, publishing associations, creatives and artists. Many are represented under the banner of the Coalition for Effective Copyright. They are calling for the draft bill to be returned to Parliament to be reworked. 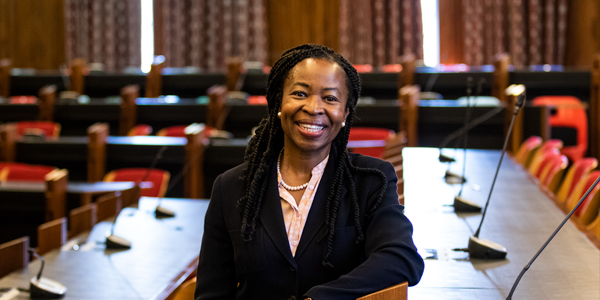 Professor Raimi Gbadamosi, an artist, writer and research associate at WiSER says the bill will encourage artists to produce more work which will improve sales.

"Artists are becoming aware of the inherent value in the rights in their works and themselves. This amendment seeks to recognise this. The bill will empower artists to make new work, enhance the market place by encouraging sales by artists who would otherwise hold ion to works that might increase in value, and remove predatory contracts that rely on the relative weak positions artists often have in relation to large and small corporations. "

Gbadamosi believes that the bill will enhance the creativity of artists. "The ability to use existing material as source to new original works is crucial in the creative process, and this bill recognises the possibilities which at the moment are technically illegal, and limit the scope of inventiveness," he said.

Some contentions revolve around the open-ended fair use clauses in the bill that they say could mean entire textbooks or study guides stand to be reproduced and distributed without compensation to the creators of the content. It could significantly curtail authors’ earning from sales and drive job losses in the publishing industry, they say. They also raise the point that decolonising the current copyright legislation without decolonising other institutions in the country, especially the courts, weakens reform efforts. Supporters of the Bill promote that fair use is not carte blanche for copying everything, but is restricted by four factors which determine what is fair or not.

Professor Jonathan Klaaren from the Wits School of Law says in the academic space, the bill opens up new opportunities, especially digital academic publishing. "University presses occupy a small but arguably crucial place in the developing knowledge economy – they are by definition committed to publishing new and emerging authors but also must swim with the large commercial publishing houses," he said.

Another prickly issue has emerged from claims that multi-national tech companies are allegedly paying to influence copyright policy through funding targeted research and academics at universities around the world. Opponents of the bill say it is tech giants who will ultimately stand to gain by being able to digitally reproduce content without remunerating those the creators of the work.

Wits Vice-Chancellor and Principal, Professor Adam Habib, on opening the seminar, said the debate on decolonising copyright law comes down to finding ways to move beyond the conceptual level of decolonisation to dealing with specifics of how transformation must take place while understanding its full implications.

“This is a debate between competing but not contradictory progressive intentions. The question is about how we marry these two,” he said.

Habib said knowledge cannot continue to be corporatised and knowledge created from the public purse should be publicly accessible. At the same time he said the University stands behind emerging black scholars to produce and publish their work, to tell South Africa’s own stories and to produce the country’s own research while receiving appropriate financial reward for their output.

It was against the backdrop of these complexities and tension points that Ruth L. Okediji, Professor of Law at Harvard Law School and Co-director of the Berkman Klein Center for Internet and Society at Harvard University gave her keynote address.

Okediji said that in amending South Africa’s 40-year-old copyright law, reform has to be broad, innovative and adaptive, “not a replication of what was inherited.”

“Colonial legacies have hindered the competitiveness of law making in Africa. Addressing these legacies requires of us to adopt truly creative approaches to disrupt these fundamental legacies, including the creations of hybrids . Copyright law is not a zero sum game – if authors lose the public loses, if the public lose, authors lose,” she said.

Okediji added that balancing the different stakes in copyright legislation – from libraries and publishers, to poets, authors and musicians should allow for flexibility that can promote development, innovation and the values of a society and human capital formation.

She also said creatives need to be as vigilant about copyright law reform that meets their needs as they should be about how they enter into contracts.

But she cautioned: “In the absence of dynamic and living tension in the way poets, authors and musicians are able to borrow, to mix, quote from each other, in the absence of freedom of press, and in the absence of capacity of citizens to consume and redistribute cultural goods we face on-going destabilisation of local institutions and patterns of creativity, which is a death knell for future generations.”

Okediji concluded her address acknowledging that copyright law in South Africa is complex but the legislative reform should not be muddled up with the needs to improve administrative functions in state institutions from the courts to the collection management organisations.

“The reform process should not linger; it needs momentum, clarity and vision. It should not be a debate about the past but about new copyright law that propels the country into a future that is inclusive and makes it possible for every citizen to take part in a data driven digital economy,” she said.

The robust seminar ended with a call for more honest - even challenging conversations to take places so all stakeholders can engage openly and with transparency and that what ultimately becomes law serves society as a whole in the best way possible.

The proceedings of the workshop can be found here.