Witsies in Black Panther and The Color Purple

Witsie Atandwa Kani stars as young King T'Chaka in the much-talked about Black Panther which has amassed fans across the globe. Kani, holds an honours degree in theatrical performance from Wits, dazzels in the Marvel movie as the younger version on his real-life father, John Kani who plays the older King T’Chaka. Kani senior is also a member of Wits Council.

During his student days Kani junior captivated audiences in the Wits Theatre, the training ground of the country’s leading artists. 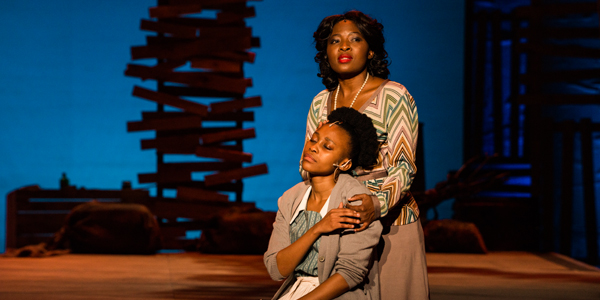 Local theatre-goers are equally enthralled by Wits talent featured in The Color Purple.

Three graduates from the Wits School of Arts and two academics are part of the play which has entranced South Africa since it opened at the Joburg Theatre.

Professor Sarah Roberts’ magic as the production designer brings it all together as does Stan Knight, renowned production manager.

The musical is based on Alice Walker’s Pulitzer Prize-winning novel and Steven Spielberg’s Oscar-nominated film starring Whoopi Goldberg and Oprah Winfrey and later staged as a musical.

“You don’t simply ‘watch’ The Color Purple, you experience it … it’s akin to a religious experience where you immerse yourself in it, and then you emerge afterwards feeling that any piece of theatre here on after is always going to be compared to this and will be left wanting” Janice Leibowitz, Glitterandtoast.com

USA x ZA ✊ Surreal Moments!! What a privilege and honor to meet and sing with the Composers & Lyricists of The Color Purple Musical who flew in to our African shores to support the South African cast in the premier production of The Color Purple in Africa. Thank you @brendarussellwrites @alleewillis and @bray_stephen for blessing us with your presence and wise words. What a blessing! #colorpurplesa #southafrica #thecolorpurple #joburgtheatre #actorslife #surrealmoments #composers #lyricists