Homo naledi and Australopithecus sediba travel to the States

The South African national treasures will for the first time ever go on display for international audiences, when it is exhibited in Dallas, Texas

The South African fossils, Homo naledi and Australopithecus sediba will for the first time ever go on display for international audiences, when it is exhibited at the Perot Museum of Nature and Science this month.

The Perot Museum in partnership with the University of the Witwatersrand (Wits University) and the National Geographic Society, have collaborated to host the exclusive exhibition, Origins: Fossils from the Cradle of Humankind from October 19 2019 to March 22, 2020. The two specimens of these fossils, named Neo and Karabo have left South Africa under tight security on Monday, 30 September.

Origins will mark the first, and likely only, time these fossils will be on display in the U.S. and will be the first time that ancient hominin fossils have been transported for public display in North America since “Lucy” (Australopithecus afarensis) toured the US between 2007 and 2013.

The bilingual (English and Spanish), 5,000-square-foot exhibition will tell the stories of these amazing discoveries, from a young boy’s stumbling upon the first specimen of Au. sediba, to the breathtaking journey of six female scientists – dubbed the “underground astronauts” – who excavated the bones of H. naledi from a deep and dangerously narrow cave complex in the Rising Star Cave System near Johannesburg. 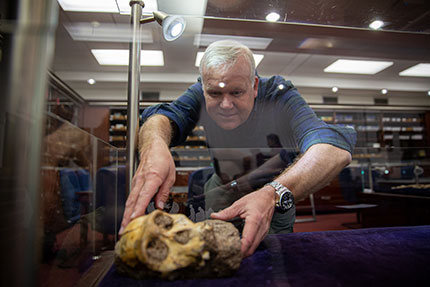 Acclaimed paleoanthropologist, University of the Witwatersrand Phillip Tobias Chair in Human Origins and National Geographic Explorer at Large, Professor Lee Berger, led the groundbreaking discoveries of both Au. sediba (2008) and H. naledi (2015) that have provided further evidence for the complex and nuanced processes of human evolution.

“It is our pleasure to share these South African national treasures with the people of Texas and across the world. Science should have no boundaries, and our collective knowledge should be made available to the entire human community,” said Professor Adam Habib, Vice-Chancellor and Principal of Wits University. “These fossils are evidence of our common origins, and the research and knowledge thereof must transcend boundaries so that they mark a path to a collective future defined by human solidarity. Our partnership with the Perot Museum is built in this spirit, and we look forward to enhancing it in the coming years.”

Origins will bring to life years of scientific research and dynamic partnerships tied to the Perot Museum’s recently launched Center for the Exploration of the Human Journey, a global hub for education, communication and research dissemination in the study of human origins, for which Berger serves as Distinguished Science Advisor. The Perot Museum’s partnership with Wits University, the official custodian of the fossils, cultivates projects that strengthen international scientific and academic cooperation.

“Origins: Fossils from the Cradle of Humankind will be a historic opportunity to explore our shared human history by coming face-to-face with the actual fossils of our ancient ancestors,” said Dr. Linda Silver, Eugene McDermott Chief Executive Officer of the Perot Museum. “The Perot Museum of Nature and Science is proud to be part of the discovery story that is shaping our understanding of the roots of humanity. We are committed to facilitating dialogue about and sharing the latest research on human origins, as well as other topics of global importance.” 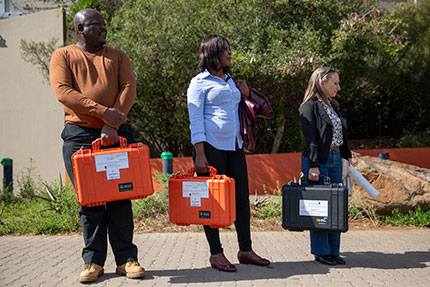 In the exhibition, guests will have the once-in-a-lifetime opportunity to view two skeletons of Au. sediba and H. naledi, including newly discovered fossils of these species, and encounter a first-ever, hyper-realistic, life-size sculpture of H. naledi. Captivating National Geographic photos of the South African caves located in the heart of the Cradle of Humankind UNESCO World Heritage Site will be on display, as well as an interactive “challenge” illustrating how scientists must fit into tiny spaces to reach underground bones like those of H. naledi.

The exhibition will also feature a simulated excavation site that will provide an immersive, hands-on experience where visitors of all ages and abilities can role play using the same ground-penetrating technology that paleoanthropologists and archaeologists rely upon for fossil exploration. The final gallery will transport visitors to Southern Africa with a display of native animal taxidermy, including a rare white rhinoceros, cheetah, African lion, spotted hyena and klipspringer.

A glass-encased visiting scholar lab within the exhibition will provide research access to the fossils for scientists who might not otherwise have an opportunity to study them – and guests will enjoy a rare opportunity to view this research in real time. Furthermore, the Museum will create professional exchange and development opportunities for early career scientists from Africa and across the world.

Additionally, a special Treasures of Southern Africa display will celebrate the various discoveries and innovations of the lower continent, including the world-class research center at Wits University and other African contributions. A variety of items – such as a sculpture gifted to President Bush by President Nelson Mandela, on loan from the George W. Bush Presidential Center, a fossil of an Early Triassic Thrinaxodon, rock art, and exquisite garments inspired by both modern red-carpet fashions and traditional Basotho blankets – will be showcased throughout the Museum.