The Astronomical Plate Archive of the South African Sky is a unique collection of astronomy wonders.

Saved from imminent destruction years ago, an invaluable and unique astronomical plate collection has found a home at Wits University.

The new Astronomical Plate Archive of the South African Sky is now based in the School of Physics and is the result of a joint effort by the Wits Centre for Astrophysics and the Astronomical Society of Southern Africa (ASSA) to find a permanent home for dozens of historically important photographic plates.

These glass plates are examples of old photographic techniques and how telescopes were used some 100 years ago. There is a 1910 plate depicting Halley’s Comet with its magnificent tale as it brushes especially close past Earth. As well as extraordinary detailed photographic plates from 1922 of one of the phases of the Moon in the southern skies – a beautiful image of the craters.

How these plates were saved

The CSIR (Council for Scientific and Industrial Research) was the custodian of the plates but some years ago, realising that the plates could be destroyed, Alec Jamieson from the Astronomical Society of Southern Africa Johannesburg Centre (ASSAJhb) collected the plates and arranged temporary storage.

Efforts to set up a suitable storage facility at the Johannesburg Observatory was problematic and the longer the plates remained on site the less likely they were to survive.

ASSAJhb subsequently brought this to the attention of Professors John Carter (Head of School) and Sergio Colafrancesco, DST-NRF SKA Chair of Radio Astronomy, in the School of Physics. 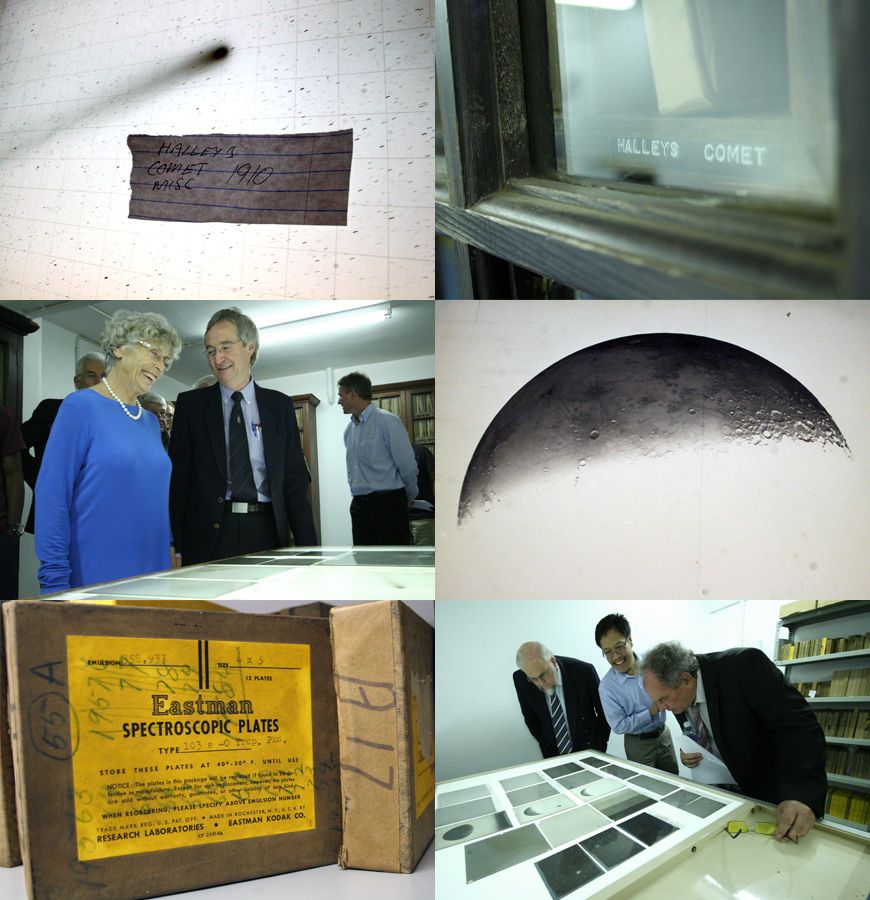 Colafrancesco, together with Jamieson and Jerome Jooste (Chairman of the ASSAJhb), immediately realised that the plates are part of the unique Astronomical Plate Archive started in 1909 by Robert Innes, the director of the then Transvaal Observatory in Johannesburg, and that it needed to be preserved for historical, cultural and research purposes.

“This is a very important historical record of photographic plates of the southern skies,” Colafrancesco said at the inauguration of the Astronomical Plate Archive at Wits.

“I am impressed by the astronomical and photographical quality of these glass plates. High-definition digitisation techniques will now allow comparisons to be made with the historical observations of the southern African skies and the present plethora of multi-frequency data in the search for long time-scale transient phenomena,” he said.

A generous donation by Wits alumna and former head of Architecture at the old Wits Technikon, Hillary Veale, allowed for the Archive to be established and will contribute to the unique astronomical research potential in the southern hemisphere.

Witsie made a NatGeo Emerging Explorer

Underground astronaut, Marina Elliott, says she is honoured to be part of this prestigious research programme.

A postdoctoral Research Fellow in the Evolutionary Studies Institute (ESI) and Centre for Excellence in Palaeosciences at Wits University, Elliot has been named a 2016 National Geographic Emerging Explorer.

She is one of 13 scientists from various countries who have been chosen to be part of this prestigious programme from the National Geographic Society that “recognises and supports uniquely gifted and inspiring scientists, conservationists, storytellers, and innovators—explorers who are already making a difference and changing the world”.

“It is an amazing honour, and especially humbling to be included in this year's cohort, as it is an incredibly diverse and talented group of people. It is exciting to be joining the National Geographic family, an amazing group of people, and an organisation that creates tremendous opportunities to reach people all over the world and make a difference through exploration, scientific research and education,” says Elliott. 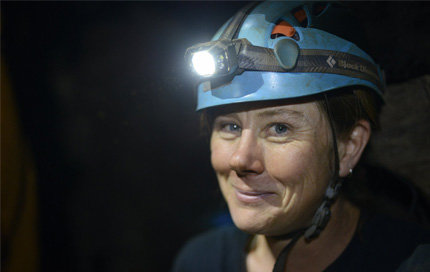 The biological anthropologist is part of Wits University’s Rising Star Expedition team led by renowned palaeoanthropologist, Professor Lee Berger, who excavated the now famous Homo naledi – a new species of human ancestor and announced the landmark discovery during an international launch in 2015.

Elliott was one of the underground astronauts – a specialised group of six women Berger sourced through social media and who all fit the strict criteria of having to be tiny and small with specialised skills in caving and spelunking as well as excellent archaeological, palaeontological and excavation skills.

After the initial expedition, the Canadian joined the ESI where she continues to do research on H. naledi.

She plans to use the financial support and this recognition to promote science education in South Africa and around the world. “I am particularly interested in encouraging young girls and anyone who might not normally have access to educational and financial resources, to pursue studies in the sciences. I also want to promote scientific exploration by creating opportunities where people can develop skills and knowledge to go out and make discoveries of their own. There is so much more to discover!”

It is just exciting to realise that the great age of exploration isn’t over with, that there are places to explore and there are things to find. – Marina Elliott

In this interview with National Geographic’s Christina Nunez, Elliott talks about the path that led her to being part of the Rising Star Expedition, and the way forward.

Back to the future: Space-age exploration for pre-historic bones

The extremely difficult conditions in which University of the Witwatersrand’s (Wits) Professor Lee Berger’s Rising Star team was forced to work, gave rise to the use of space-age technology to map the Dinaledi chamber and Rising Star Cave, in which over 1500 Homo naledi fossils were found.

Ashley Kruger, a PhD candidate in Palaeoanthropology at the Evolutionary Studies Institute at Wits, who was part of Berger’s initial Rising Star Expedition team, roped in the use of high-tech laser scanning, photogrammetry and 3D mapping technology to bring high resolution digital images to Berger and team members on an almost real-time basis in order to make vital decisions regarding the underground excavations.

“This is the first time ever, where multiple digital data imaging collection has been used on such a sale, during a hominin excavation,” says Kruger.

In 2013, after the discovery of the hominin assemblage, Berger put a call out for “skinny” explorers to join him on the expedition to excavate what became known as the Dinaledi Chamber, a cave system near the Sterkfontein Caves, about 40km North West of Johannesburg in South Africa. An all-female team of six “underground astronauts” were selected to undertake the underground excavation, due to the challenge of navigating a 12 meter vertical Chute, and passing through an 18 centimeter gap.

Berger himself was unable to go down into the chamber, which forced the team to introduce high-tech digital imaging techniques to virtually bring the exploration site to the surface.

Kruger and colleagues have now mapped the entire path of the Rising Star Cave, including the Dinaledi Chamber, both on the surface and underground, using a combination of aerial drone photography, high-resolution 3D laser scanning, a technique called white-light source photogrammetry, and conventional surveying techniques. The research paper, Multimodal spatial mapping and visualisation of Dinaledi Chamber and Rising Star Cave was published in the scientific journal, the South African Journal of Science, on Friday.

“The 3D scans of the cave and excavation area helped scientists above ground immensely in making decisions about the next step to take with regards to excavations,” says Dr. Marina Elliot, Rising Star excavation manager, and co-author of the paper.

“These methods provided researchers with a digital representation of the site from landscape level right down to individual bones,” says Kruger.

The precise digital reconstruction of the Rising Star Cave provides new insights into the Dinaledi Chamber’s structure and location, as well as the exact location of the fossil site. It also paints a detailed picture of the challenges that the underground astronauts had to deal with in navigating the caves on a daily basis for over five weeks in November 2013 and March 2014.

“We realise now, through the use of high-resolution scanning that the Dinaledi chamber is about 10 meters deeper than we originally thought,” says Kruger. This is important in understanding the processes which may have aided the site’s formation.

Kruger’s paper is the first of a number of papers due to be published on the spatial understanding of the Homo naledi site within the Dinaledi chamber. The rest of his research aims to provide answers about how the site formed, what the position of the fossils can tell researchers, as well as to paint a more detailed picture on how the hominin bodies came to be in the cave.