Researchers at the Sydney Brenner Institute for Molecular Bioscience and the Division of Human Genetics at Wits, in collaboration with peers in Europe, the US and Canada published this research in the May issue of the American Journal of Human Genetics.

KWE causes a redness of the palms and soles with consecutive cycles of peeling of large sections of thick skin, often exacerbated during winter months. Oudtshoorn is a town in the Western Cape province of South Africa where the disorder was present in large families. 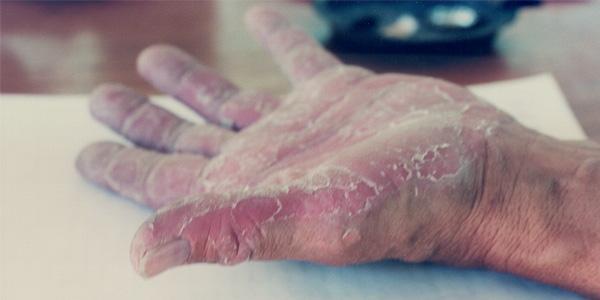 Afrikaners are Afrikaans-language speakers descended from predominantly Dutch, German and French settlers, who arrived in South Africa in the 17th and 18th centuries. Afrikaners have a high risk for several genetic disorders, the best known being familial hypercholesterolaemia (inherited high cholesterol leading to heart attacks early in life) and porphyria (sensitivity of the skin to ultra-violet exposure and adverse reactions to specific drugs).

These disorders are common because of founder mutations brought to South Africa by small groups of immigrants who settled in the Cape of Good Hope and whose descendants are now spread throughout the country. KWE is one of these less well-known founder genetic disorders.

KWE was first described as a unique and discrete skin disorder in 1977 by Wits dermatologist, Professor George Findlay. He noticed that it occurred in families and had a dominant mode of inheritance – i.e., on average, if a parent has the condition about half the children inherit it in every generation.

In addition to identifying the genetic mutation for scientific purposes, this research now enables dermatologists to make a definitive diagnosis of KWE in patients. It further enables researchers to understand similar skin disorders and is a starting point for developing possible treatments.

Since the late 1980s, three MSc and three PhD students at Wits researched the disorder, firstly under the supervision of Professor Trefor Jenkins and from about 1990 guided by Professor Michèle Ramsay, Director and Research Chair in the Sydney Brenner Institute for Molecular Bioscience.

In 1997, Wits MSc student Michelle Starfield and a group in Germany mapped the KWE trait to a region on the short arm of chromosome 8. The researchers showed that it was likely that the South African families all had the same mutation but that the German family had a different mutation. This research preceded the sequencing of the human genome and subsequent research focused on characterising this region of the genome and examining good candidate genes. The KWE mutation remained elusive.

In 2012 Thandiswa Ngcungcu, then a Wits MSc student in Human Genetics whom Ramsay supervised, chose KWE as a topic for her PhD. Ngcungu's research involved large-scale DNA sequencing during an internship on the Next Generation Scientist Programme in Novartis, Basel. The mutation was not detected by conventional data analysis so copy number variants (genetic changes) – where regions of the genome are duplicated or deleted – were investigated. Ngcungcu and the researchers then discovered a mutation in a region between genes that was present in all South African KWE-affected individuals studied.

During this time Dr Torunn Fiskerstrand, University of Bergen, Norway, independently discovered the genetic cause of KWE in Norwegians. Ramsay and Fiskerstrand collaborated. The different DNA duplications in the South African and Norwegian families overlapped at a critical genomic region called an enhancer (which ‘switches on’ the gene) – providing strong evidence that this was, in fact, the KWE mutation.

For over a year the scientists researched how this duplicated enhancer caused KWE. They demonstrated that the mutation causes a nearby gene to produce more protein than normal and that this abnormal expression was the likely cause of the skin peeling. Exactly twenty years after determining that the KWE mutation lies on chromosome 8, the mutation that causes KWE was identified and published.

Solving the mystery of KWE was a journey of data analysis, ancestry mapping, genomic comparison and global collaboration. Ngcungcu continues her work as a postdoctoral fellow examining the genetics of another skin disorder, albinism, and as a lecturer in the Division of Human Genetics at Wits from July 2017.