Design and production of new 16-layer electronics board, produced in South Africa for CERN, showcased to Science and Technology Minster, Naledi Pandor.

Researchers from the Wits Experimental High Energy Particle Physics (EHEP) group showcased the benefits of the collaboration between science and industry when they displayed a South-African made prototype of a high-tech electronics board at the International Conference on Research Infrastructure (ICRI) that was held in Cape Town recently. 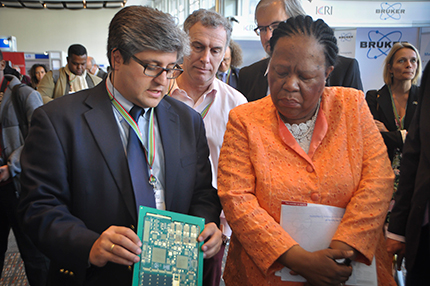 The new 16-layer electronics board, designed for the upgrade of the electronics of the ATLAS detector at the European Organization for Nuclear Research (CERN),  was manufactured by the Cape Town based company, Trax Interconnect, which specialises in the construction of printed circuit boards (PCB’s). This is the most complex PCB ever manufactured in South Africa to date.

Minister Pandor, who was duly impressed with the collaboration, took some time to meet with Professor Bruce Mellado, leader of the Wits EHEP team leader at CERN and his students Joyful Mdhluli, Harshna Jivan and Matthew Spoor, as well as with Professor Jean Cleymans, the Chairman of the SA-CERN consortium, and Dr Zinhle Buthelezi and Dr Tom Dietel from the ALICE experiment at the stand.

“We are extremely grateful of the continuing support that the Minister and DST has given to the SA-CERN consortium throughout our work at CERN,” said Mellado. 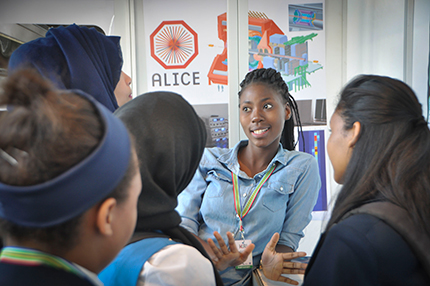 The electronics board, called the TilePPR, is the basis of a new piece of hardware, named the Tile Calorimeter (TileCal). It will be used in an upcoming upgrade of the ATLAS detector at the Large Hadron Collider (LHC) at CERN, where the Higgs boson was discovered in 2012.

“This is the next generation of hardware for the ATLAS detector electronics. The Tile Calorimeter is one of the central calorimeters of the ATLAS experiment at the LHC, which is used to measure the energy and direction of the hadrons, jets and tau leptons,” says Mellado.

“This is a great example of how fundamental research that is constantly pushing the boundaries of technical capabilities can directly impact South African economy.”

The LHC will be upgraded in 2024, in order to increase its instantaneous luminosity. This upgrade has called for a complete redesign of the read-out electronics in the Tile Calorimeter.

Specialised equipment had to be imported for the construction of the board, and was kindly funded by the DST. 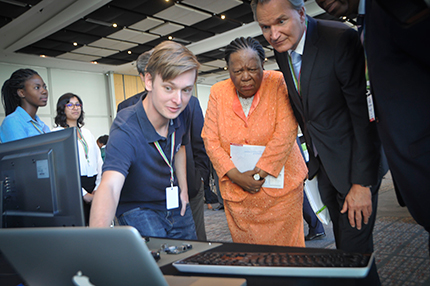 The production of the board proved a challenge because of the high density of planes, as well as the extreme precision needed to link up the electronic circuits throughout the 16 layer board. The result in product was a milestone for the South African electronics industry in that this board is the most sophisticated produced so far.

“Trax had to develop a number of techniques and procedures that now enable them to produce high-densitiy boards efficiently,” says Mellado. “These techniques are now used routinely in commissions.”

The company has since increased its employee numbers and is actively involved in skills development and transfer in the South African electronics manufacturing industry.

“We used to be able to only produce up to a maximum of eight-layer PCBSs, and now, thanks to the design of the TilePPr, we now have the 16-layer capability,” says Daniel Dock, managing director of Trax.

Mdhluli, who along with 15 other students from the Wits EHEP group, work at CERN on a rotational basis, said her experience manning the CERN-SA stand at ICRI was an exceptional experience.

“It gave us an opportunity to share with high school learners what the SA-CERN/Wits-ATLAS group does, and we got an opportunity to expose the learners to a different field of study and the opportunities available for them within the science field,” she says. “There is a shortage of data scientists and it is vital to share our experience with young people to try and motivate them into furthering their studies in this field.”